Lessons to Learn From STEEMIT's failures

$STEEM is rallying very quickly but there seems to be an exploit in the reward system.
I’m not sure if our PtD system will have similar flaws but it’s good to learn from others’ mistakes: Handful of Users Are Gaming the Liquidity Reward System And Earning 1200 STEEM...

Note: I first discovered this by watching transactions on SteemStream, a very interesting, nifty tool Within the… by blakemiles84 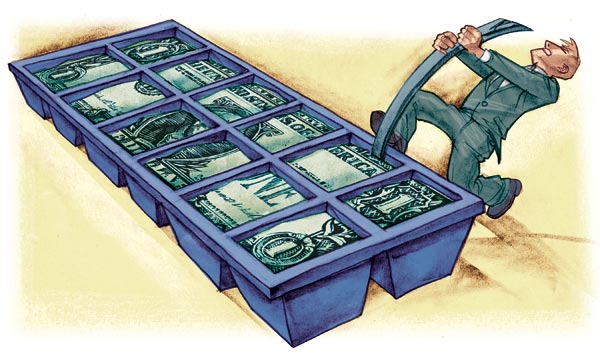 The Liquidity rewards bot is too effective or defective — Steemit

4 Days ago the Liquidity Rewards associated with the Internal Market were announced in the post below. As a… by gavvet

Liquidity Rewards Recently, we were told that the Steem network would provide liquidity rewards for market… by complexring

If it can be gamed, it will be gamed.

Steem is a great model for Project Decorum to check out.

So say a person makes an app then has a bot create many accounts and then floods the network for requests to this site so the app maker gets more and more reward. Well if you remember opportunistic caching kicks in and that is not counted towards PtD rewards. Also the rewards for even the most popular data have a downward curve for lack of a better term because the maidsafe team knew that these things could be manipulated and they want that sweet safecoin as evenly distributed as possible without stifling incentives to create the next best app. I think they have a decent handle on it but they will test it first during alpha to be sure I assume.

Many users can connect from same IP. All users go to random place on network. So by creating an infinite amount of users even from the same computer will give you infinite opportunities to bypass the caching and earn reward for app dev.

Doesn’t #3 on coinmarketcap mean that Steemit is a success? Anomalies aside.

Many users can connect from same IP. All users go to random place on network. So by creating an infinite amount of users even from the same computer will give you infinite opportunities to bypass the caching and earn reward for app dev.

Caching will kick in long before you get too far

Each account costs one coin to be created since you need to store your account info and that needs at least one coin spent to buy storage. So you are limited to the number of coins you have. Then you are at the mercy of the FR since the rewards are based on that figure. So if plenty of people are supplying storage then to get even one coin would take perhaps a million PCs doing a few to t000s of APP GETs.

Testing will tell us the better story. And remember that if the rewards are gamable to an extent that a gamer can actually get more than they use in resources & costs (coin, PC, Bandwidth, their time, electricity, etc) then the code can be amended to change the rewards algorithm and when people upgrade the gamer has to find another way.

tl;dr
So I see no problem. Any gaming will be SLOW and if it is worthwhile to game (more than pennies a year) then we can upgrade the algorithms to be better. Better as in reduce gaming and still give the rewards to valid usage.

But yes the system can handle some gaming the same as people game other money for services currently on the internet. Yet those services survive and growing. Any gaming has to be in perspective to the overall effect.

And the network will see gamed coin return to be recycled at a future time. So for SAFE gaming does not have the disastrous effect on the network as gaming of other systems that do not recycle their coins.

Also remember that rewards are needed to attract APP developers. So it is a case of keeping gaming in check.

I thought browsing safe was free and does not require an account?

At some point it was planned to cost, but i thought that was changed to encourage adoption. I may well be mistaken and confuse it with the sponsored creation in exchange for email or some other auth method that was talked about.

I would have thought that the main thing to learn from steemit is that PtP could be a HUGE draw and content reward systems are very attractive to people… that is some seriously epic growth and interest from Joe Public!

Hoping that caching is going to solve all PtP problems is optimistic at best. If the caching was so affective that no one ever triggered a reward, then PtP would be pointless. If there is any angle for PtP to generate any sort of useful income, it will be possible to create bots/bot nets to do the same.

Note that I use bots in the loosest term - a script added to a popular site which causes clients all around the world to request the content would be just as good.

At some point it was planned to cost, but i thought that was changed to encourage adoption

Browsing is free. And accessing data is free.

You mentioned creating users (accounts) which does require you to store at least your account info. This is different to browsing.

In any case if just using GETs from the APPs and no account then other factors come into play when a single source tries to game APPs because caching and bandwidth will be a limiting factor.

Also I get the feeling that people think that APPs are going to earn coin every few GETs or something. If space is plentiful FR is low and you may need 100 billion GETs just for one coin and if space really plentiful then it could be 100 billion billion GETs per coin. Now with that scale even a 10Gbits/sec link will not get you much and caching kills it too. That is why APPs will only really earn when the GETs are spread across the world and from random sources not some contrived system.

Imagine someone tries to game with a data centre of 1000 servers and 100 connections per server and 10Gbits/sec link for the 1000 servers. Thats 1000 chunks per second into the farm, and even without caching kicking in you could be looking at 100,000 seconds for a coin.

A day to tie up a data centre just to get a coin, even if the coin is $1000 you would still be losing money.

Lets say FR is really really really good and its only 1000 gets per coin then thats 1 coin per second absolutely max without caching killing it and at a realistic price of <1$ thats less than 3600$ per hour. Still hardly worth the data centre which would be costing more.

BUT if you have 100,000 people using the APP like you tried they have 1000’s of GBs bandwidth and the APP could be getting 100 times what you could game and the APP owner has no costs.

The scale does not match. The gamer has a lot of costs and effort to game and the legit APP owner has no costs for running the APP and no impediment to earning coin. So the gamer HAS to game when FR is in their favor and even then WHY? Why not just create an APP that people will use and earn coin at a faster rate. Even pay someone to create the APP and earn a lot more than using resource.

The game that will do best compared to the effort is the small time gamer who only looks for a few coins per few months and they will do little to affect the network or price. If they try more then their roi drops.

Actual figures would have to determined by experiment and fortunately there will be people who will test this gaming.

Succes of steemit is very good news for Project decorum also. I would not be surprised if PDC would reach same marketcap when its launched.

I’m expecting project decorum with a flourishing safe network will be in the billions of $ market cap. Quite easily infant! And I’m not day dreaming. Social Media and the internet as we know them have not even taken their first steps yet, they’re still in their nappies. When safe network is live I’m expecting to see Apps and other features impossible to the existing internet.

Don’t know about you guys buy I’m hoarding as many maidsafe coins as possible. These ridiculous low prices are a sign that day traders must also be in their nappies. A quick buck profit and they shoot their load into some crap coin. I expect there will be lots of regrets not buying maid right now. More for me.

You don’t do the GETs yourself, you make others do it without their knowledge.

A simple block of JavaScript on a busy page is going to throw 1000s of requests in the direction of a gamer’s data. These will come from different people all over the world. This JavaScript could be clickbait, hidden malware, injected into a popular site via an exploit, etc.

In fact, the recent attack alleged to have come from China was embedding JavaScript in a popular Chinese site which spammed GitHub to its knees. All without users even realising it was happening.

It seems that pro-PtP people seems to highlight how PtP will give rewards worth earning, while at the same time saying caching will stop any rewards worth earning. You simply can’t have it both ways. Either caching will make the whole feature pointless or it will be sufficiently ineffective to allow legitimate or gamed requests to generate rewards.

All these coins with huge market caps just provides more precedence for maidsafecoin being worth a fortune when the time is right. We are all just very early in the game.

Check the links…
I don’t mean the whole project failed, I’m referring to how it’s being exploited.

If something similar with steem but improved will be on maidsafe network, the network will have a huge succes. I like the user friendly interface and the speed that maidsafe has.

Is there a SafeNet version of Steemit yet? Would be nice to see a Steemit/Medium type platform on it