What prevents the client from GETting from a different number of elders? Like, if it chooses to only ask 1 elder, or all the elders, how could the client be punished?

Maybe the client has to send a number specifying which subchunk to request from each elder, and then some spam-suppression can be in place for requesting from too many elders?

I have seen that sporadically too

we can potentially increase the number of replicas - adults holding chunk A - without any significant extra stress on the network, with obvious gains for data redundancy

is it a mountain or a mole hill to implement? next week, next month or next year? yes I know , when is not really permitted.

@Anselme has fixed a consensus bug, implementing anti-entropy for handover as well as generations. More comprehensive join retries (where we ensure we’re in the current section state) have been merged too

My understanding is the client would not be able to do that as the logic is handled at the section level. So the client requests a chunk, and all the elders (or three currently) receive the request and then decide how to proceed.

A solution we are looking at now is information dispersal algorithms (IDA, also known as erasure coding). This could help us significantly reduce the volume of data transfer per GET, by having adults pass a share of the data to the elders rather than the whole thing. The elders then pass these data shares back to the client, who reassembles them and, voila , chunk A is recreated. Potentially this could reduce the flows on a GET to just 1.4MB for a 1MB chunk.

Data being spread out geographically is obviously good for making sure data is always available / never lost. When retrieving data response times are also important, asking all nodes to provide a part of the data seems like it it would be slow and detecting failures at the point the data is required.

You could just ask the closest node for the data?

To validate all nodes have the chunk you can periodically ask them all too hash a random section with a random integer. (This can also be used to keep statistics of who is closest to that that elder).

Ideally you want to encourage the nodes that hold a chunk to be as far away from each other as possible, but also know the fastest path to retrieve the data. Makes me think of the Babel Routing Protocol

is it a mountain or a mole hill to implement? next week, next month or next year? yes I know , when is not really permitted.

It does sound fantastic.

But yeah, is this potentially a year fix?

is it a mountain or a mole hill to implement?

There are already libs for this. So it’s a matter of the Adults encoding the data and giving the correct piece to each elder who then returns these to the client. So much more mole hill than a mountain. It should be 1-2 weeks man hours I think. At least of that order.

I’m sorry i’m confused. How do you break a file into 7 pieces then reassemble it with only 5/7 of those pieces? That doesn’t seem logically possible. Where does the receiver get the 2/7 missing data from? I must have missed something.

Basically think of it as the file gets made larger by circa 40% and split in such a way that you can lose some pieces and still have the file reconstituted. Here’s a quick and easy paper on it https://www.eecs.harvard.edu/~michaelm/TALKS/RabinIDA.pdf Note we don’t have a large file issue and a normal Rabin ID A(or even reed Solomon) algo is enough

I appreciate the link but this is supposed to be easy reading? This is on par with reading a physics paper.

Thanks, but no thanks David. I stopped reading (due to sudden onset of migraine) at page 3, Abstract. An Information Dispersal Algorithm (IDA) is developed…

For a quick read I recommend the Erasure Code page on Wikipedia:-

In coding theory, an erasure code is a forward error correction (FEC) code under the assumption of bit erasures (rather than bit errors), which transforms a message of k symbols into a longer message (code word) with n symbols such that the original message can be recovered from a subset of the n symbols. The fraction r = k/n is called the code rate. The fraction k’/k, where k’ denotes the number of symbols required for recovery, is called reception efficiency. Optimal erasure codes have the pro...

Skip the maths! I am not a mathematician and I refuse to try to understand the weird squiggles.

The key part of the explanation is:-

Instead of asking Bob to acknowledge the messages she sends, Alice devises the following scheme.

Bob can reconstruct Alice’s phone number by computing the values of a and b from the values ( f (4) and f (5)) he has received. Bob can perform this procedure using any two err-mails, so the erasure code in this example has a rate of 40%.

are the actual information - her actual phone number:-
555629

or even contain any of the same data!

The downside is that more data has to be transmitted or stored to guarantee the integrity of the information.

I work in IT and have to explain object storage which uses erasure codes to protect data rather than RAID. In fact, RAID is a subset of erasure coding apparently. If you do the maths…

And talking of doing the maths - constructing this synthetic data to store the information and then recreating the information from it uses needs more processing and takes longer than just storing it. And that is why it is slower and generally has to have a cache layer in front of it to get any kind of performance.

But if I’m understanding this correctly you aren’t actually reconstructing the information you’re just creating a map to where the information is located. It’s like transmitting torn map fragments or gps coordinates to where the data is hidden in XOR space. And since SAFE stores everything ad infinitum it’s just a matter of pointing to the right file location in order to retrieve the data. So perhaps the confusion lies in that you aren’t actually having the end user reconstruct the file at all but rather the coordinates for the file location. Or am I again missing something?

Currently, we are using a halfway-house system where the client contacts three elders at random and those elders contact the four adults holding chunk A - so we potentially have 12MB (3x4) of data flowing across the network for a 1MB request - better, but still not great. And reducing contacts to three elders comes at a cost: if we have only three elders interacting with the adults we no longer have a supermajority to decide if one of the adults is dysfunctional, making dysfunction tracking more complex.

A solution we are looking at now is information dispersal algorithms (IDA, also known as erasure coding). This could help us significantly reduce the volume of data transfer per GET, by having adults pass a share of the data to the elders rather than the whole thing.

I had thought that the system was to send a request packet to the adults and they respond saying they have the chunk ready and then the elders tell one adult to send the data.

Basically that was similar to what is described but only for the request/check packet to the adults and then the fastest adult is requested to actually send the chunk.

Why the change to sending the chunk immediately.

Great update Ants! Interesting that Erasure Codes are being considered. There has been a lot of discussion on the forum in the past on this and I’d recommend this thread for people wanting a refresher:

So we have say 3 chunks, A B & C. Consider then erasure code where 2 of 3 is OK. Now forgetting the size issues on getting the data (replicated chunks will be the most efficient) or the size of total data stored for X resilience (where X is % you can lose) where erasure codes look to be more efficient (but I will explain below, why they may not be). Okay, just to make sure I understand what you’re saying, let’s say you have some chunk you’d like to store, X. You have two redundancy schemes, r…

Spectacular update! My favorite in a long time. This change is next level tech!

How do you break a file into 7 pieces then reassemble it with only 5/7 of those pieces? That doesn’t seem logically possible.

Perhaps it help if phrasing it as 7 overlapping pieces.

(how exactly overlapping is done is then more complex to explain, but the simple story of “slicing into pieces” should appear logical, I hope)

Thanks team. We are getting close to testnet!

Amazing all the steps taken to ensure data permanence.
Do wonder how this works with archive nodes?

Really love it how everything is being optimised 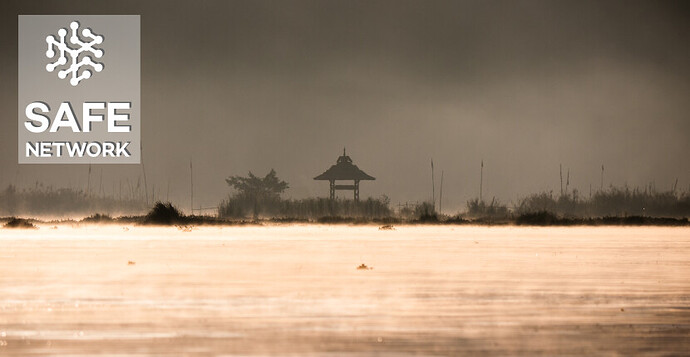