Here is Hollywood gloating in one of its trade mags over more censorship:

A High Court Justice in England makes a decision to cut off access even after finding problems with MPAA member arguments.

Corporate Sponsorship: Institutionalized Censorship of the Cultural Realm on...


Link the to the actual book: 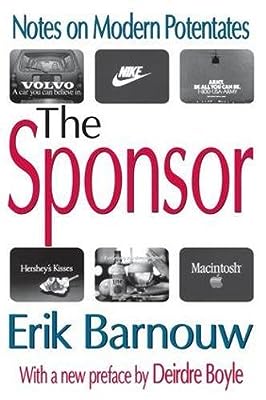 The television sponsor has become semi-mythical. He is remote and unseen, but omnipresent. Dramas, football games, and press conferences pause for a "word" from him. He "makes possible" concerts and p ...

CNet used to be reasonable but now it has sponsored must read articles that argue in terms of the what is good for carriers only allowing for the supply side perspective literally talking about what is good for industry :

CNET's Marguerite Reardon explains how three key phenomena could reshape the wireless industry in the next few years and pave the way for more-affordable mobile services.

Also pro NSA as if NSA were a sponsor:

As a key deadline approaches, the US Senate votes against extending a controversial National Security Agency program -- but votes down a bill designed to reform it.

And also pro copyright in how MS needs to step up the censorship on its app store to appease copyright holders:

The software maker is struggling to make sure its online stores are clean, well-lighted places for apps, even as it readies the update to its Windows operating system.

Remember Google is already delisting a quarter billion links a year because of sponsor complaints.

I don’t get the UK government. Both parties offered more bs austerity and it appears the liberal party ( increased austerity) won the election with something like 62% of the popular vote but it still resulted in a land slide win for the (even greater austerity) crack down conservative party and has probably emboldened a stupid kangaroo court decision like the one above. And the US sponsored media take: liberals need to move to the ultra right or get defeated in elections.

We need MaidSAFE and a carrier free internet that the courts and states and corporations cannot interfere with! Looks like a great new open phone for about $108 Yuphoria from Micromax running Cynogen 12 out this week but only available in India (?) It will be available from Amazon India, but not sure if it can be exported? https://www.cyngn.com/

Bs austerity? Have you seen the size of the national debt, which is increasing month on month due to a large deficit?

If spending more than you earn is austerity, I dread to think what the opposite is.

To reply on topic… Corporations want strong copyright. Governments do the bidding if corporations. Should this really be any surprise?

Copyright will become obsolete because It will no longer be enforceable, not because some politician says so.

That’s not what austerity is about. Austerity is an absolute fraud. The wealthy did stupid things with the money associated with their names, gambled away a huge chunk of it and the puppet politicians (due to sponsorship) are bailing them out by auctioning off already paid for public infrastructure and support systems at fire sale prices to the very same perps who caused the problem to help prop them up. So the public will pay tolls under privatization theft for stuff that was paid for. Austerity also implies raising taxes. But in this case the taxes will be cut on the so called ‘job creators’ and the burden shifted to the rest of the people in return for ever decreasing and more expensive services and infrastructure. Its an absolute fraud, crime and scam. The government and courts in Britain are just outright lying to their people as they peddle more surveillance as they are getting nervous about keeping order as they roll out more crime. That’s what it looks like.

I’d like to point about above how stupid the approach of the UK court was. Now any site the copyright mafia thinks could cost it money can be shut down over the mere potential. Idiots! And Hollywood is calling this a landmark case as if that shit is simply going to be imported all over the world. I want EU court to override that crap. This by the way looks like an end run around neutrality. With their interlocking boards they still get to censor what people can see based on their greed and money motives. I don’t think so.

Bs austerity? Have you seen the size of the national debt

The debt is the result of the bailouts. Perhaps, a 1% tax on speculation might be in order…seen some figures banded about…£1.7 trillion in tax could be raised. Surely it’s logical to tax (maybe not 1%, although i would love to witness the uproar

) where the money is, rather than kicking people in wheelchairs who had nothing to do with the greedfest that resulted in the collapse.

Surely it’s logical to tax (maybe not 1%, although i would love to witness the uproar ) where the money is, rather than kicking people in wheelchairs who had nothing to do with the greed fest that resulted in the collapse!

UK people should seek out their Bill of Rights, Declaration of rights…interesting talk at the British Constitution Group

We, the British People have a right to govern ourselves. That right has been subjugated as a consequence of acts of treason having been committed by the collective political establishment, aided and abetted by corrupt segments of the judiciary, the police, the Church and the civil service.

I agree that the money was spent on bailing banks out, etc. However, if you believe that the state has the democratic right to do such things, you can’t then say ‘not in this case’.

Just to point out , Labour made the bailouts. The Lib Dems and Conservatives just didn’t object and continued on a similar policy. ALL of the main parties would have done the same, in other words.

Now the debt needs paying. Either people pony up or start asking serious questions of how the people are represented.

yep it was all labour… http://blogs.spectator.co.uk/coffeehouse/2013/11/the-tories-have-piled-on-more-debt-than-labour/

I think the dynamic was that the Banks were “too big to fail” and had a number of Govts by the balls. The answer would seem to be regulation and to castrate the Banks and break them up as Roosevelt did historically when spotting the danger. We just need politicians that are ballsy enough to bite the bullet.
(sorry for the excess of gonad related metaphors…:

Politicians that challenge the banks tend to get assassinated. No relying on politics is not the answer. We simply need to stop using the banks. Pull our money out period. Use crypto, precious metals or cash. Simple as that.

Also i find the suggestion of paying off the national debt rather ludicrous so long as we are using debt based currency. Debt = Money. The more money we have the more debt we’ll have. The debt is infinite. It is mathamatically impossible to pay off the national debt. It should not even be considered, for any country, at all that uses debt based currency. Which at that time is pretty much most every country around. Any country that is enslaved to the banks and the fractal reserve system should just forget about paying off their national debt to the banks because it’s impossible and just silly to contemplate.