I was thinking we really need to spread the news of Fleming to those guys that were yelling buy MAID 3 years ago but since lost interest cause it took too long. So I am trying to think of a strategy to reach out to them and, for me, they all reside on twitter

To that end I am going to suggest next Saturday is twitter pump day. How it works: throughout the day go on twitter as many times as you think is reasonable and tell people about Fleming/direct them to this forum to do some research themselves. If you just wana do it once that will still reach people that are just in your network and help. I plan to be a super shill and do like 5 throughout the day though lol. Post here if you plan to participate as well as any suggestions!

This topic will be deleted if ANYONE mentions Maidsafecoin (MAID). Any suggestion of pumping the coin price is against the forum guidelines since speculation of coin prices is limited to the one topic. Not to mention the unethical aspects of a coin pump attempt.

In my opinion/experience you are setting up the project for a fall after your news pump. Whether the fall places the project behind or not is to be seen. The time to do this is when Fleming has been announces for testing.

No issues over an increased talk of it, but a pump is always followed by a fall. Especially when there is no product to back it up.

The issue is that you get people interested and then they look and leave again very quickly when done as a pump. When you just increase talk over time then those more likely to stay take a look and some stay. This is how the community forum has grown over time.

Now when we have a beta product then people coming in off pumping the product are likely to stay because there is actually something they can use which looks like the promised product. (my opinions obviously)

hmmm ya maybe pump was not the best word to use. maybe “outreach” or “promotion” would have been better. Anyways its not an attempt to get people to all buy at the same time to drive the price up, although that might be a side effect of showcasing the product at a particular time. As I mentioned I just want to remind old friends to check out this project if they haven’t been keeping up to date on progress lately.

IMO they could call Fleming beta lol. I think this is a great time to show people there is actually something here. A real decentralized network anyone can join could be very appetizing to the crypto crowd. I am suggesting getting peoples mouths wet now since fleming is on the horizon. Maybe do another one after release if people are into this idea. It’s just a tweet or two, not a costly or time consuming undertaking

they could call Fleming beta lol.

Yea, no they couldn’t. It may feel like it somehow, but it does not have any attributes that could make it a beta in the normal sense of beta.

My comment though was related to your intent to “promote” but in a pump up excitement way.

If its just to promote then in my opinion a single day is not going to cut it. It needs to be over time. Talk about it, explain the benefits and so on. Bit hard to do in one day since people take time, maybe weeks or months to start realising the benefits enough to check it out with the intent to stay if good enough. One day effort is like a “flash in the pan” and will go as fast as it came. The benefits of SAFE is not an easy thing/concept to get across in a day.

Any sort of hype can do more harm than good. Certainly it might bring in some new people who are genuinely interested in the project, but it will also bring in those who just want to ride up the price and then dump for a profit - hurting those who are real long term investors and giving the project a black-eye to those who are only moderately interested.

Please no pump marketing! IMO, just share existing Maidsafe materials and focus on what the Safe Network will do in the long run for all of humanity. We need long-term focused people.

If I remember correctly, Fleming is not going to have the daya layer, but will test the new distributed routing system, so people won’t be able to store data on it.

Given this, it’s certainly not able to be considered a Beta for the Safe network.

Once the data aspect is plugged in follow Flemming’s success, beta may be becoming a closer prospect.

If I remember correctly, Fleming is not going to have the daya layer, but will test the new distributed routing system, so people won’t be able to store data on it.

How would the routing of data would be checked otherwise…?

That would make sense, though I remember seeing it will be a ‘transient data only’ network or something similar. Maybe it’s as you say and that the routing nodes will be distributed, and data nodes similar to Alpha 2.

Clarification by someone more knowledgeable would be appreciated

Well I am volunteering to do a few tweets not to make this my full time job. Sure I agree a more consistent effort would be better, but you can’t expect people to just sign up to do that for free because its more beneficial to the group then what they were initially willing to donate! Really I would hope to get their attention and direct them here. When you are selling something that is usually the first step and often the salespersons only real job, after they have attention its just like ok now check out these resources from the company.

Um isn’t that what everyone wants to do? Just different timeframes on when they want to enter and exit. In any case the longer term investors benefit from more people playing the game to. Its short time spans that are vulnerable to local peeks and dips, in the long run you just want more people at the table for a higher average though.

Um isn’t that what everyone wants to do?

Nope. I suppose with a normal coin/token that only has the purpose of being trade-able (for other tokens or fiat) that might be what people would want to do. For me and other real investors in this project however we are aiming to use the tokens to build content for the network itself. The more value the tokens gain over time the more we will be able to grow the network when it’s launched.

fundamentally everyone is trying to buy something undervalued or not actualized yet, and then, at a later time, realize a higher value. Anyways I want to stay away from attaching this idea to pumping the coin price. That might be a nice side effect, but I am really after the same thing: realizing value. So lets grab the attention of some smart people and draw them into these forums and perhaps go on to building content for the network itself. I don’t really see a negative to bringing in more people. Some will have short attention spans and prolly leave before doing much, true. If even a few people become really involved though, I think it was worth the effort to poke them and cost us basically nothing.

Um isn’t that what everyone wants to do?

Interesting. And true… why would we all risk buying.

Pump wise… if people read the word pump they may assume a price pump. I’m not sure even if we attempt a price pump as a community we would achieve that.

I promote the SAFEnetwork by demonstrating and talking about what it does. Which is enough for people to say “Shut up & take my money”.

I’ve not had anyone yet ask me about buying coins if I tell them I know a get rich quick coin, and I am afraid to promise riches as actually the maidsafe token is just a token, not an actual SAfECoin.

I do think a promotion/marketing “pump” on social media is a good idea, and this has been done around larger Maidsafe events.

When SAFEnetwork launches, I’ll be the first running around banging the “sort of get rich quick” drum if it’s not too late for any of my doubters to buy in.

Get your friends and family in, or buy a position for them while things are still cheap.

Maybe the marketing team can give us advice on what type of tweets and tags we should use to promote the technology and expose the flaws in existing crypto.

Reasons to be thankful…

We are doing better than well.

My head is spinning, if I’ve left anything out please add in your replies.

We should blow our trumpet more often.
Looking at that list, we should all have the knee wobbles. This project, the team and community have built wonderful things.

Coin price rises will be a welcome symptom of the above. 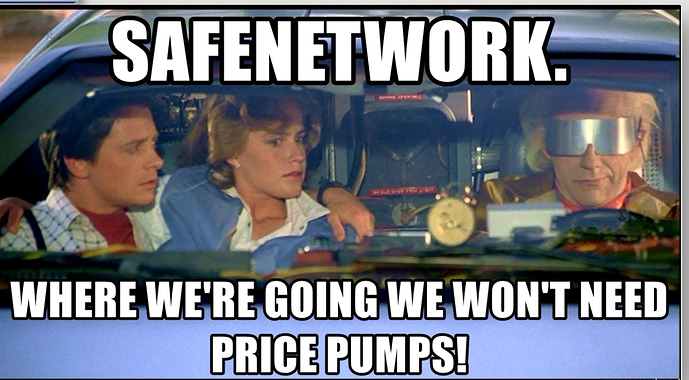 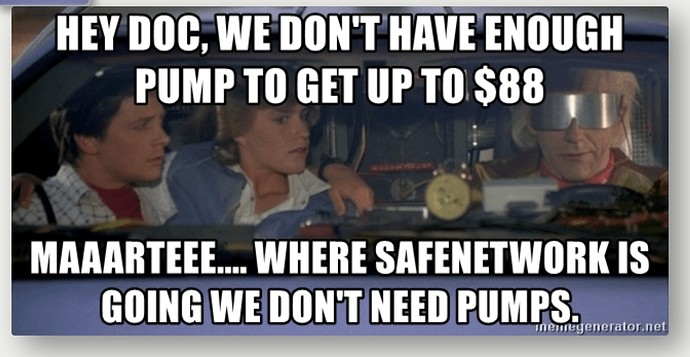 wow thanks for an actually supportive reply to this idea lol. I was thinking I should not have even mentioned it TBH

I really just think we need to reach out to those OGs that were telling me about maidsafe 3 or 4 years ago but since fell off the wagon. Show them the milestones being reached and maybe they wana get involved again. For me all these people reside on twitter.

Maybe the marketing team can give us advice on what type of tweets and tags we should use to promote the technology and expose the flaws in existing crypto.

ya if they could even just make a promotional graphic for Fleming we could post that and link to these forums bam ez outreach to old and new fans. And totally all of these features you mentioned are great talking points but challenge is a 280 character tweet that captures someone’s interest to come in here and read all the rest!

I was thinking I should not have even mentioned it TBH

I wasn’t meaning to come off as not being supportive in general, just not for a ‘price pump’ in particular as that tends to have a specific meaning within investor culture.

I really just think we need to reach out to those OGs that were telling me about maidsafe 3 or 4 years ago but since fell off the wagon.

I think that is a good idea.

if they could even just make a promotional graphic for Fleming we could post that and link to these forums bam ez outreach to old and new fans.

Agree with that too. @SarahPentland – Are there any plans by the marketing team to make something like this?