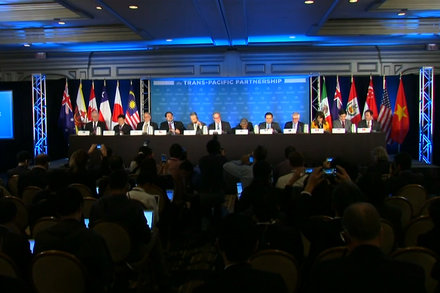 Trans-Pacific Partnership Is Reached, but Faces Scrutiny in Congress

Securing approval from Congress for the deal between the United States and 11 Pacific Rim nations could be the toughest fight President Obama faces in his final year in office.

Propaganda through and through.

yes, they’re definitely spinning it for the sheeple.

As far as this being posted under “off topic,” I can’t disagree more. From where I sit/stand, TPP is one of the reasons MaidSafe was conceived…or what TPP has been constructed to thwart.

Continue to forge ahead, devs. If there’s something I can do to help, don’t hesitate to ask.

The most unacceptable element of the TPP is being is transnational’s being able to sue governments for lost profit, I think that leads to war pretty quickly maybe even in the developed world, this doesn’t sound like redress for governments playing Lucy with the football it seems more like the treaty of Versailles that will lead to massive outrage and radicalization and war. It was in useless trade prior agreements and its long been part of economic warfare used by the ‘developed’ world on the developing world but this is the developed world really trying to cannibalize itself and with its austerity nonsense it doing to the whole developed world what the Versailles treaty did to Germany in WW!.
Now transnationals are supposed to be able to sue governments for lost profits in some unaccountable rigged transnational court.

It’s already bad enough that we don’t prosecute puppet politicians for selling out government tax bases for their private gain when they lure in businesses with graft (so called tax breaks) into their districts. This luring is graft and crime that leads to a public sector downwards spiral and gutting and the rich being able to essentially directly tax everyone else. Any bargaining of this sort should have a: we don’t negotiate with economic terrorists approach for every government globally.

If there was anything likely to lead to a 3rd world war it’s this nonsense about transnationals being able to sue for lost profit in fake courts because it says when we come to rape your people if you oppose us we can use your tax base to do it. It’s very much like the abuse of imminent domain to take people’s homes and land to give money to the “job creators” through their corporations. It’s also like negative interest rates where they get to tax you for holding your money or austerity where they get to put your public treasury in their pockets through socializing their risk and privatizing or phony public private partnerships and it’s also like outsourcing jobs and getting tax rewards for doing it and bringing in immigrants but denying them citizenship to further suppress wages. It’s time for profit suppression for non constructive business, profit forfeiture and confiscation on percentage profit years basis, Tobin taxes and charter revocations and regular reviews, increasing raw asset taxes on the wealthy and massively higher taxes on the wealth that dissuade all of this behavior and critically reduce the political power of the wealthy. Forced conversion to non profits with planned permanent charter expiration and stock market divestment and conversion to banks to credit unions. Its time to eliminate eliminate almost all of the economy that supports the wealth and convert it to support the middle class, the only legitimate class. It’s also time to get rid of the trade agreements, all of them, organizations will negotiate independently in each case with states using best practices against them and with no fear of protectionism. It’s time to completely roll back economic globalism except for states working to shore up tax evasion and end the capital flight blackmail nonsense. Most importantly its time to replace all corporations with cooperatives.

Notice it seems we have the rise of the former Axis allies. Germany is the economic ruler of the EU. Japan has been cut loose under a rightest government to pursue militarization. The Pope has been speaking in Congress.

If we survive this I hope we have a way of making sure corporations can never exist again and are recognized as an outright evil (3rd Reich style) form of organization. They are extractive and concentrating and political suicide, the can never end well. Will it take a 3rd World War to learn this?

We also have to start teaching civics and history in schools and get rid of these puppet schools that exist to drive the creativity and spine from children, that teach nothing but blind authority and soft criminalize with Fs kids that show the potential to spread opportunity.

oh, we’ll survive. Like that line in jurassic park, “life finds a way;” we can help it along a bit by enlightening/educating…spreading the word about freedom and liberty and how they’re under attack and what you can do to protect yourself and your loved ones, and even what you can do to fight back.

business and politics are battles for domination and power, and the epic war between these factions will hopefully enlighten rather than enslave us…but that’s all a matter of perspective I suppose