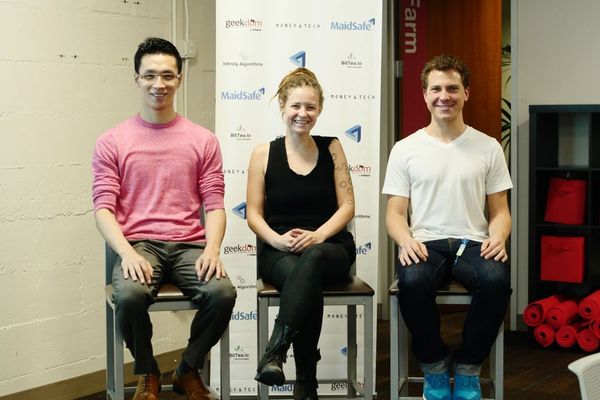 A presentation on the SAFE Ecosystem

Thu, Feb 5, 2015, 6:30 PM: Join us for a presentation on the implications of a SAFE Ecosystem. What does the Internet look like with an inherent cryptocurrency and how does it affect content creators?

Join us for a presentation on the implications of a SAFE Ecosystem. What does the Internet look like with an inherent cryptocurrency and how does it affect content creators? Paige will highlight the various opportunities that this economy can bring to those working in the digital world where property and ownership is complicated and doesn’t conform to the legacy systems.

Tune in as this will be played live here:

I will be attending for sure.

Good luck for the event @dallyshalla. I’m looking forward to seeing it!

@betterthantrav, the presentation will begin at 7:00; we open the doors at 6:30 pm Pacific Standard Time;

that’ll be 3 am for you @nicklambert

Either way if anyone wanted to watch this recording afterwards it’ll be at that youtube link.

There was a interesting debate about large servers representing thousands of individual vaults. Yes, the server does have large storage capacity and also high bandwith.

However, if each vault is responsible for caching, then costs increase because caching does not reward Safecoin. I would like to see TestNet3 confirm this statement.

“Running multiple vaults uses more bandwith compared to a single vault. Therefore, a farmer should only create enough vaults that can be supported by their bandwith.”

If the above statement is true, then why would a farmer make more than one vault? Because it increases the size of their storage net. If data is spread out in XOR space, then having 2 vaults increases your chance to catch more PUTS compared to 1 vault. At the same time, it also increases your bandwith costs, which deters them from making 1000 vaults.

The idea of the network automatically rewarding the uploader of a content based on its popularity seems to me like a very flawed concept. Is there a logistic need for the network to behave this way or is it just an added layer over it?

The idea of the network automatically rewarding the uploader of a content based on its popularity seems to me like a very flawed concept. Is there a logistic need for the network to behave this way or is it just an added layer over it?

Doesn’t this happen automatically? The more popular a file becomes, the more caching is done so the less Safecoins will be farmed. A videoclip like Gangnam Style could cause serious problems for vaults and the network without caching.

I can’t find where I got this idea but I somehow understood that simply uploading content that is available to the public would generates safecoin for the person who uploaded the content if the content becomes popular. Which triggers plenty of red flags in my brain. But all I can find now is how it works for developer. I’m still not sold on this idea but I need to read more about it.

There is a reward available if you upload content, make it public, and watermark it to identify the wallet to receive the reward. There are several threads on the forum where this has been debated - you aren’t the only person to have questioned it! Searching for “watermark” might help you find them if you want to read up.

Ah there it is, thanks for the hint. Now time to read and see what others have to say on the subject.

So it’s just a suggestion and not automatically paid by the network, that’s a relief. Though, I’m still not sold on the idea of giving safecoin to apps developer based on GET request. I understand the intent but it seems very easy to game the network and just farm safecoins. I’m a bit late to the party so I assume there’s already been a lot of discussion about this too, is there any keyword I should look at to get a better idea of the pros and cons of it?

Rare keywords that come to mind are watermark / watermarked

There’s a short bit about this in the following MaidSafe FAQ video. I’m not sure if the system docs have more, but its worth a look if you’ve not browsed them:
FAQ: Why should developers be interested in building applications using the SAFE Netowork?
All 33 MaidSafe YouTube FAQ videos

This is a decided feature - the optional aspect is just whether the uploader of public data decides to assign a wallet.

If you want to, it would be good to have a collection of links where this is described, discussed etc. and post them on the forum, maybe you or I can create a short FAQ containing them?

I haven’t had the time to watch them, I’ll put that on top of my list, thanks!

Here’s a link I found that explain clearly how the system will suggest a donation based on the popularity of the public content. Complimenting the granularity of digital consumption. And I also found the Safecoin white paper.

In the video it was said that the release is estimated to be in april. Is this release of testnet3 or beta?

@reivanen; the testnet 3 phase is active with the api, and safe launcher;

The MaidSafe team in Troon, and abroad has had a tremendous overhaul of the code base, in terms of expansion, and consolidation of code that was tested when testnet 2 began some time at the end of October; Consolidation of the vault code base by 70% and making it simpler to use could increase feature integration in testnet 3, and that’s underway;

Perhaps within the next few weeks we could see what will establish the basis for phase testnet 3;

edit: my question was answered in the end of the Q&A session. The beta launch is estimated to april and testnet3 start “in a couple of weeks”

Yeah, I was kinda thinking that too.

@DavidMtl @Luke
I’m watching the video now and it sounds like I was wrong, reward is not to be by suggested “tipping” controlled by the user, not automatically awarded by network (video around: 15 to 19 minutes in).

However, we have discussed the automatic reward for content, and I don’t see what your concerns are about gaming the network. Anyway, it is moot, as this doesn’t seem to be the idea any more! So maybe leave the question

lol now you are confusing me. I’m re-watching it and it seems pretty clear that it’s just a suggestion by the network. Are we talking about the same thing?

About gaming the system I’m talking about the “App incentive model” for developer that sounds like easy to game, and honestly kind of a weird concept in itself.