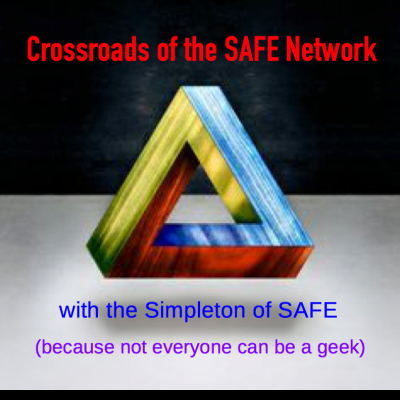 SAFE Crossroads Podcast #14 Max Hernandez, A Frontier on Every Doorstep

In this Episode Your host and Max Hernandez, author of Thieves Emporium, take time to explore the new frontier, the electronic frontier, where people have new choices. We cover aspect of this gripping and educational tale, and then turn to utilize...

"Your host and Max Hernandez, author of Thieves Emporium, take time to explore the new frontier, the electronic frontier, where people have new choices. We cover aspect of this gripping and educational tale, and then turn to utilize Max’s knowledge and experience to examine the potential effects of the SAFE Network and similar technologies on the shape and form of civilization, and the experiences of individuals faced with different choices and new possibilities for navigating their way through life.

"You’ll also find out how to read the book for free, or purchase it if you wish to contribute to Max’s work.

"This is a definite no miss episode.

“Thanks to John Barrett, host of Bitcoins and Gravy, for breaking ground for this with his previous interviews with Max. His episodes, linked below, are well worth listening to again, or for the first time, because we cover a lot of different ground here.”

This one should generate some discussion on the forum!

Today’s show left me wanting more.
I disagree that the centralized government has any real control anymore and the power has transferred to a capitalist system and it is controlling energy rather then belief. but now we are seeing the centralized system are starting to implode onto themselves as productivity becomes at a lower cost to nearly zero cost, the financial system is being artificially created with debt through money creation.
So we are seeing the third industrial revolution to begin where power structures are not needed because the decentralization of all things. It is a choice now where you want live in the world through knowledge and technology.

I agree with you besides the point the centralized governments aren’t the ones in control. I believe that to be partially true. The corporatization of the Americas has done a good job at increasing productivity through automation but wages never reflected the dramatic rise in productivity, concentrating wealth that has been put towards lobbyist and political donations, to help control the political process. The military and law are the medium through which those who have money can control all within the long reach of the law. (also money being hoarded by the rich or invested in intangible things rather than recirculated has deepened disparity and made it increasingly difficult for the general public to stop working and think or take action for two seconds without losing their jobs or going broke). Things are bleak, everyone is desperate, people are killing others out of the hopelessness and powerlessness they see in life. But luckily collaboration and decentralized solutions to our many heavily policed avenues are now creating their own robust networks. Some even using the system against itself (Silk Road). Communication, information, and hopefully trade will be free again. So exciting times

Edit: aftee posting this I want to point out I realize you may mean the govt has no inherent power because of this but to say it doesn’t have power isn’t completely true YET. The majority still follow the law but feel comfort in knowing not everyone goes with the grain

All I point out is the fact of individual choice being at the base of it all. It’s not that government has no power, it is that “government” has no true existence outside of people’s thoughts and decisions about it. Conceived legitimacy of immoral actions by those labelled “public servants”, because “obedience is a virtue,” and consequent abandonment of personal responsibility (or vise versa) is the true source of the manifestation.

Remember a couple things regarding corporations. (1) Their existence is given power by the state. (2) People running them may use their influence to buy government action, but it is the force wielded by government actors that make this strategy useful. (It is the courts, police and prisons that enforce the “laws” that corporations pay to get passed, not Walmart, Monsanto, or McDonalds police/armies.)

Yes, the tools of government control have come into the hands of fewer people than ever in history, and those tools have become awesomely powerful, more so than every in history. But the true power lies exactly where it always has: in the fact that only the individual can actually “make a choice,” whether they chose to own their choices or not. That was my only point, and it actually is the great hope of developing free systems to allow more and more people a different direction to travel when the cognitive dissonance starts to set in, which it is doing more and more as the tools of control become used more and more.

There is ebb and flow. I choose to view it as life being interesting and evolving to a higher state in the process. As supercentralization of power arises, as it is doing now, I see it as an opportunity to evolve as a species. I also view it as an existential challenge. I think as a race we will evolve or . . . perish? go back to square one? . . . something like that.

For those who want a more intellectually rigorous treatment of this subject, I cannot recommend this audiobook highly enough:

A Short History of Man: Progress and Decline

Hans-Hermann Hoppe addresses the rise of family structures, the development of private property, social evolution prior to the Industrial Revolution, and the rise of the state — all without regard for cherished myths. Narrated by Millian Quinteros....

We’ll get back to Max in the fairly near future. Much more to talk about.

I enjoyed this podcast, but I feel that Max has some quite serious misunderstandings about whether hierarchies are natural to our species. They are, and this is not a bad thing. It is not easy to free oneself from the biases of recent (ie. post-enlightenment) intellectual fashion, but it is necessary to understand the accepted legal basis of such violations of justice as throwing people in prison for their tweets, and why a demand for radical egalitarianism will exacerbate, not mitigate, the problem of state power. Politically Correct Intersectional Insanity, anyone?

Natural Elites, Intellectuals, and the State

Once upon a time, in the pre-democratic age, when the spirit of egalitarianism had not yet destroyed most men of independent wealth and independent minds and judgments, this task of supporting unpopular intellectuals was taken on by individuals....

I feel that Max has some quite serious misunderstandings about whether hierarchies are natural to our species. They are, and this is not a bad thing.

I think that Max points out that the radical, deep hierarchies have been enabled by technology, and that they didn’t exist in previous history, because they weren’t possible.

I didn’t get anywhere that he thought hierarchies are unnatural, just not scale-able to vastly totalitarian levels till the twentieth century.

Fergish, I hate to plead tech problems, but I’ve already downloaded this podcast twice, and rather than being saved to my disk, it just starts playing in a player, so much as I’d like to pick over exact wording, I can’t without another download. I took him to say that he saw hierarchy itself as the problem, which is not an unusual position to take among egalitarians, and even anarchists. I also took him to say that only recently through technology had totalitarian control been feasible, and I agree with this. My disagreement is that the natural, meritocratic, hierarchies have long gone, and it is the totalitarian state which is enjoying the advantages of increased control to pursue its perverse agenda. The problem is not that some King is reading our tweets, but that the CIA/5 eyes is.

However it came across in the interview, from everything I’ve heard in other interviews and discussed with Max in and out of our interview, I’m sure he would have no disagreement with anything you said here.

The “Obama knows” concept is not to limit the hierarchy, but a reference to include just the NSA/5 eyes hierarchy you refer to. These are key parts of what enable the totalitarian level of hierarchy referred to. If you read Thieves Emporium, it’s clear he groks this.

Fergish, I just tried to read Thieves Emporium. Wouldn’t it be nice if we could all sing Kumba Ya together? Unfortunately it confirmed my worst suspicions about Max’s mindset. Yet another sci-fi novel with a female heroine? With a bad boyfriend/pimp called “The Bastard”? And two cutesy/victim daughters? Score it zero on the PC brainwashing awareness scale. Sorry, but a lot of people are way beyond buying this kind of sh*t. Yes, it makes me angry.

I can appreciate if you don’t find it good literature. I’d be happy to listen to any constructive engagement about the philosophical underpinnings, or even errors in estimation of the author. Or even how it is overly stereotypical.

The tone of your response does not indicate anything very constructive, though. I don’t find sniping criticism especially compelling. It reflects more on you than anything else.

Now, would you care to have a respectful discussion or should I consider myself dismissed?

I don’t find it well written. So, you’re a straight to “tone” complaint guy. OK. Consider yourself dismissed.

Hey @fergish! I was replying to @justin but for some reason discourse isn’t acknowledging when I hit the reply button. It neither shows it on my end or in the reply, very strange. I was only addressing a small difference in opinion between the post Justin made and my own distinction. Unecessarry I’m sure and also not a critique of the guest or your hosting (I thought both to be informative and thought provoking). If I ever see a difference in opinion I might lend mine to merely be constructive in thought process but not to force it. Keep up the good work John!
Edit: of course this time discourse works properly and shows who I’m replying to haha

Max certainly drew the discussion towards a more philosophical and specifically a more political view of the potential consequences that the safe network may have on society. While many inferences may be drawn based on his comments, the foundation that they are based on is solid and his examples were very useful in framing his arguments.

There are many different reasons for being excited in the aspect of the safe network’s emergence, the current political climate being one of the more pertinent ones. However, I would also be very excited to hear Max’s insights on how this sort of decentralization would effect the average person’s daily life in a more noticeable way, namely:

All in all, I enjoyed the podcast, and look forward to enjoying the book as well. Keep up the good work!