Thanks David for a fun interview. 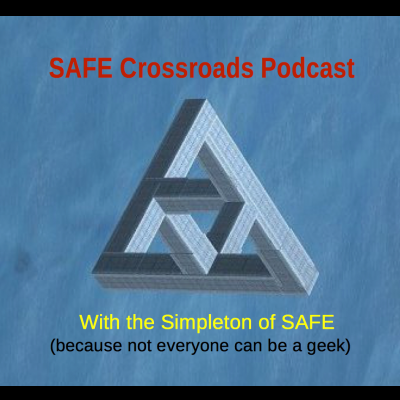 In this Episode We have the pleasure of talking with David Yamanaka, a consumer experience specialist and avid supporter and pursuer of that which empowers the individual. He has been a very active member in the Project SAFE community and is great at...

Gah when do the installers come out! I want my maidsafe even if it is just the launch deck.

Predicted for the end of the week.

Sweet! I can’t wait to listen as I drive to work tomorrow!!! I find myself looking for a new SAFE Crossroads Podcast on a daily basis now.

update edit: I am going to listen to the whole episode again tomorrow. There are so many quotable gems that were said. I will admit I felt a strong kinship with David Yamanaka. A few personal characteristics he shared (Being different growing up and even now with adults—for me at least, being an empath, innately knowing how to fix things, thinking 20 steps ahead) I really relate to and it gives me comfort to know there are others out there (Probably a lot here on this forum) like me who are making the world a better place.

I occasionally feel a bit isolated from my social environment and this community has given me a great deal of hope for humanity. I actually got a little misty eyed when David talked about the global paradigm shift that is happening and his observations on how it is occurring, why it is occurring and what it will mean for humanity. He also connected with me whenever he gave reasons to why he was passionate about the SAFE Network.

Thank you @dyamanaka for the outstanding interview and to @fergish for making it all happen.

The ERA of the CREATIVE is RISING

These are really beneficial for everyone and great to hear all the voices of the various people, really amazing way of getting the full picture.

Nice podcast John, I’ve listened to all of them. Really informative, thanks for all the hard work that you and your guests put in. Can’t wait for the next one!

To clarify about the issue of lag in MMO games, there are two types of “lag”. There is latency lag, which is caused by the time it takes for the client and server to communicate, and then there’s the kind of lag that is caused by an overload of the server.

The latter becomes a problem when there are many players in the same location. The server has to compute and communicate every player’s actions and the consequences of those actions to every other player. The load increases exponentially as the amount of players in the same location grows. SAFE can possibly offer a solution here by spreading this server load over multiple nodes.

However, the SAFE network will have a higher latency than a classic server-client architecture, so there are definitely trade-offs here. I personally have doubts whether real-time games are even viable on SAFE, unless a hybrid model is used.

Sadly I don’t have as much time to spend on my MMO concepts as I’d like. Not long after I announced it on the forums my partner lost our investor. Don’t ask me how, I still don’t get it myself.

I’m still working on the technical concepts in my spare time though. Which I probably won’t have much in the near future, because for the coming six months I’m going to attempt to create a proof of concept application using IBM Watson for a health insurance company. It’s going to be very interesting for sure, and I look forward to learning more about it and considering how something similar might work on SAFE!

Thanks a bunch for this explanation. It helps make better sense out of the factors myself. There is a long way to go to the prospect of high-emersion VR, but I’m betting that something will be worked out in time. Hybrid is one aspect I’ve been thinking about .

Also other uses of the Crust and other libraries may be result in very different solutions than have been conceived yet, like a dedicate network for VR interaction, in or out of games. Just thinkin’.

no worries there @Seneca I think we’ll have our game to play in network launch, with an architecture I feel will work out just fine.

@dyamanaka glad to hear from you, and to learn about your life as well.

@MrAnderson
I’m humbled by your comment. During the interview, I was only thinking about my personal point of view. Having others relate to it, make us feel… less alone.

@Seneca
Very sorry to hear about losing your investor. There’s so much for Project SAFE to overcome in the meantime. I was trying to be very conservative regarding MMO games. But anything can happen in the future.

@dallyshalla
You as well. Nice to know there are other entrepreneurs in the community. As @fergish said, we each bring something to the project.