Rust: Systems Programming for Everyone

Recently linked up on Hacker News 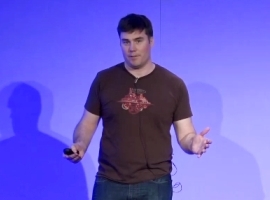 Rust: Systems Programming for Everyone

Felix Klock describes the core concepts of the Rust language (ownership, borrowing, and lifetimes), as well as the tools beyond the compiler for open source software component distribution (cargo, crates.io).

Felix Klock is a research engineer at Mozilla, where he works on the Rust compiler, runtime libraries, and language design. He previously worked on the ActionScript Virtual Machine for the Adobe Flash runtime. Klock is one of the developers of the Larceny Scheme language runtime.

Jobs in Rust are scarce.

Also, for someone inexperienced in systems programming languages generally:

You know how C++ is supposed to be C with classes? Well, it seems to me that Rust is C++ plus a few more things (ownership, lifetimes, slices, nifty build tools and pro-actively safety-minded compiler). All that’s cool, but the inexperienced person won’t be wasting his time learning C++ as it will provide a basis for later acquisition of Rust, as well as putting food on the table.

Jobs in golang were scarce for a minute. Now it is one of the highest paying programming languages. Rust seems to me like it will be similar. Personally, I’ve decided to get decent at go before learning rust. I do like rusts way of setting up a dev environment much better.

Yes, Rust will eventually become popular. Right now it isn’t and in selecting a language for making the transition to developer, C++ seems the best choice.

Rust is only a little behind C++ overall, which in turn is way ahead of Go. Probably Rust will improve to the point where its speed is on a par with C++.

The language with clearly the best speed overall is C.

Speed of compiled code makes a difference to language choice, for some users.

My experience with go has showed me that it is typically faster, because it’s easier to use than C. Since the language is so well designed, users of go can write code faster and better. The end app is more direct and so it itself is faster.

And then there’s stuff like zerotier.com, lovingly and painstakingly written in pure C by an organic desk monkey . Admittedly, ZeroTier is much faster than its competitors, and more portable, too. So, don’t let dogma guide your choices. Choose the right languges for the right problems.

I have no knowledge of Go and only a beginner’s grasp of C++. I’m just going by the benchmarks on that site, where they present the results of a dozen or so “toy programs.”

Ease of coding was not what they were testing.

sorry, wasn’t actually comparing go and rust: I assume that rust is as good as or better than go.

ZeroTier is just a work of art, is all.