Polo have faired well IMHO with BTC fork. And i’ve never had an issue. To all the people complaining, just withdraw all your tokens and go find another exchange.

Can anyone comment on Maidsafe token transactions since the 1st of August? Is the 100% miner fee / SegWit style transaction an issue for Maidsafe?

SegWit isn’t activated yet…projected to activate around Tuesday I think. Regardless, it was done as a soft fork, meaning old style transactions still would work.
Re paper wallets, the address generated could hold coins for either chain. It just depends which chain you are doing the transaction from when using it.

Thank you for that. I did a little test withdraw and then took the rest from Poloniex a few hours ago. All is well according to blockchain.info and ominiwallet 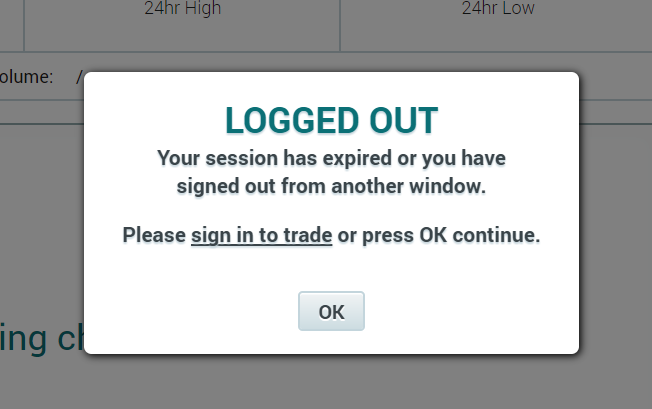 Does anyone get this repeatedly nonstop after you log into Poloniex?

Does polo not work anymore? Hope it will get fixed

@whiteoutmashups Make sure cookies are enabled and clear cache & cookies then try again. This is one solution they suggest for this problem

Thank you I’ll give that a try

r/PoloniexForum - I managed to bypass 2FA, and email verification is...

FYI to anyone who holds coins on Polo

I used to, all the time.
Try connecting to another network. I used to connect to an open Wi-Fi via a VPN client when I had the same issue. Often polo would throw me out the instant I log in, sometimes in less than a minute or in several minutes. Weirdly no such issues if I connect to a Wi-Fi hotspot created by my mobile.
I hope it helps.

FYI to anyone who holds coins on Polo

That is an interesting one.

The comments are a collection of the good, bad, misinformed, misinformation. The trolls love trolling poloniex posts don’t they.

Firstly the poster does NOT give any indication on how they bypassed 2FA, just say it was an exploit, basically just a baseless statement to add weight to their post.

Secondly they got the users password from a leaked database of another site and the user used the same password.

Thirdly he does not understand “robots.txt” file and the way the email fault works. The email problem is like this forum which opens up links to give you a pre-view of the link (nothing to do with “robots.txt”). The email client (live anyone) has javascript code that accesses the link from your browser and displays it in the displayed email. Thus the confirmation is automatically confirmed

Fourthly if you have 2FA then you don’t have email confirmation unless you love pain. So this adds weight to the fact the poster did not break 2FA (point 1)

Reading the post & the comments from the original poster

So nothing much Poloniex can do other than advise people not to use “live” for their email address and stupid if you do. Also to change their password. EDIT: actually poloniex should add a tick box and click to conform on the confirmation page. That way a simple preview will not “auto” confirm

We need to read carefully these claims by people as this one is a simple hack that will work against any exchange that uses email confirmations where some users use the same password as they used in a leaked password database of other sites.

EDIT: BTW I am not using poloniex anymore (at least for now) except to get prices.

Message to anyone using Polo. And regurgitating Reddit BS.

hear·say
ˈhirˌsā/Submit
noun
information received from other people that one cannot adequately substantiate; rumor.
“according to hearsay, Bob had managed to break his arm”

I could wrap my head around the withdraw confirmation being triggered prematurely, but I didn’t understand how the attacker would request the withdraw to their address in the first place.

how the attacker would request the withdraw to their address in the first place.

I am guessing that since he was logged in he saw which address other withdrawals went to. So can’t use this for fault.

Remember his claim was that he was logged into that other person’s account and sent withdrawal, then the user opened up the confirmation email and the “live” client pre-viewed the confirmation link which confirmed the withdrawal.

Still it takes a little faith to believe the guy’s claim and also to committing a federal offense. He made a couple of rookie mistakes in his claim and the trolls backed him up all the way. False calim of “robots.txt” and false claim of doing the “bug report” And almost certainly the false claim of “breaking 2FA”

Oh well I guess we will hear more like this. The truth is out there but claims like this do no good for finding the truth of poloniex’s woes.

6 posts were merged into an existing topic: My MaidSafe is stuck in Pending in my Omni Wallet

Short or long, they are all just bets to the red or black colors in a casino roulette. They are quite different from investing and trading. Sorry for your lost money.

Interesting way of presenting the price concept and the relationship between the coin and the network, the coin and developers’ salaries…

Does anyone know anything about this error? I’m trying to provide support. It sounds like its been going on for weeks of trial for this case

Ive only ever seen that msg get stuck like that on bittrex.
And it was because they wanted docs uploading so wouldnt allow me to even import until id done that.

I withdraw some maid to a bitcoin address and clicked the wrong email link from polo, now there stands Complete: Error. What to do now? Someone know? Please need help thanks.