Where can I see maidsafe top wallets or rich list? Could you provide a link please?

this is not a low risk investment so there is really no answer like if you invest X today you will have Y within 1 year. The thing about those is X usually has to be huge to have a noticeable impact. This is a more risky investment so it might not take nearly as much, but at the same time there is no where near the same assurance it will EVER work out at all. On the other hand, that means a very small affordable amount COULD be life changing. Think of it like buying a lottery ticket (that you may win OR lose on) only the odds are in your favor, rather then the house always winning eventually.

This is why I am always encouraging the dev team to dump that bitcoin while its up! Sure they had someone come in and project it will be worth X after Y amount of time. And by luck they were sorta right… but that was pure luck, rather then a skilled prediction IMO. If you are risk adverse you should NOT hold crypto.

Hey guys, is there any up to date way to store maid tokens on an offline wallet? I’ve been buying bits every week but would really want to put it into a ‘safer’ place than on the exchange.

Is there really not easy cold wallet solution?

Hello friends, This guide provides information on how to move your MAID from an exchange (Important! you need to move your coins from Poloniex before January 30th, 2020 at 17:00 UTC). You can send your coins to a hardware or software wallet. Before we go on let’s explain what we do here. Your MAID is in an address on the Bitcoin blockchain. The exchange actually has only a private key to this address. So what we are doing here is to explain how you can move your coins to a new address for whi…

This is the most up-to-date HowTo:

[How To]: Buy/Move/Store OMNI MAID

For ERC20 eMAID on the Ethereum network look: here Update 13.08.2021 Native segwit (bc1) addresses are not supported anywhere, do not send MAID to them. Addresses starting with 3 work, but only if they are generated on a Trezor hardware device. Translations

Bulgarian Hello friends, This guide provides information on how to buy and move your MAID from an exchange. Of course, you can buy and hold the MAID on the e…

Thanks, now I can see it. Great

The Trezor is pretty easy to use, and @Dimitar was cool enough to post an easy to follow tutorial in the link that he just posted.

True, but surely only “large holders” will split into multiple addresses.

I’d say I’m a small holder and I have split my holdings. I even have a couple addresses with just 10 MAID in them. That’s because I want to have some small amounts available for rehearsal before moving the amounts that matter.

I have wallets with varying quantities for the exact reasons mentioned of initial tests for transfers as well as wallets that hold moderate amounts. I would agree that most people who have been just buying and holding probably have wallets split up in various amounts.

Ever since the spike to 20 cents, I’ve felt the price has been pretty erratic.
This might be one of the weirdest graphs I’ve seen 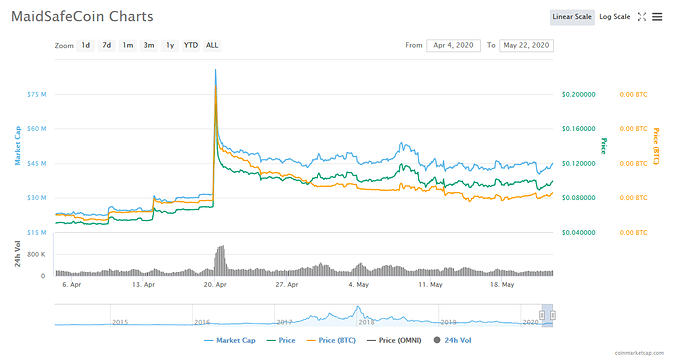 I’ve been using a normalized price indicator and super squeeze trend of MA’s to study how trend looks without the huge logarithmic swings.

The yellow line is the super squeeze (basically an weighted index of several MA’s that produce a squeeze, the closer two MA’s are the higher 0-100%, then when majority of the squeezes are very close the super squeeze is going up to 100%, signaling a big move). Once this one starts to drop from 100% to lower values this means that the MA’s are all widening and momentum is increasing rapidly due to distance between each MA increasing.

Now the super squeeze can be at high % for a long time and that’s what we have seen with this yellow background, so what is more interesting is to find consolidation/trading patterns.

The screenshot includes Elliott wave count of this super-trend and since we have completed 5 (3 up waves) this would naturally retest (4). Since the pattern is inside a triangle which should break-out within 60 days while super squeeze is at high % and the relative price at the bottom AND increasing, momentum would favor uptrend reversal.

Take note that relative price doesn’t tell us the price, only that it is gaining strength and when to expect this to appear.

Not so weird. Someone bought a ton, either to hold or on spec. They disturbed the equilibrium in a lowish liquidity market. The gap was filled (in BTC), in other bases it regressed to long term VWAP and the resolution was higher prices on higher volume over a comparatively long period. The only reasons to buy that abruptly are to either accumulate an optimal amount at the price/liquidity, or to send a signal. Either way, a positive event.

I checked upon the price which the last spike had and majority of volume was bought around 2000-1100 satoshis. Some good accumulation, the last pump was mostly because the sell orders pulled up to a high price but the whales didn’t buy there, as you can see volume is not present there. It’s mostly those people who chase the pump buy high and then in vain sell low where the liquidity is at.

So once we leave this accumulation zone the orderbook and liquidity should support increasing price and slowly push price up over the coming weeks/months.

Thank you the great analyses

Nice to see the bump to .13 cents today. Maybe 5 cent was our bottom

Does anybody have a clue if some latest code development could be behind this price increase? Is this something else than just a movement back to mean? Could this be it? Did some whale just realized there will be no more MAID supply at those low prices?

Hum… It is too short point of veiw. I think the whole development process indicates that the real SAFE network is coming closely not only this weeks dev updats.