Launch of a community safe network

In the past you mentioned that you were using the node also as a VPN server, could it be that part?

Could be, or more likely an aborted go at installing pi-hole. In not sure how to undo that - time to search a bit.

Alright, this one is statically linked with musl: https://home.ebvalaim.pl/safe_vault-linux-arm-musl.zip

No joy in getting that file. Tried from a couple of computers.

Any chance of checking.

No joy in getting that file. Tried from a couple of computers.

Any chance of checking.

Ahh, it was hosted on my Raspberry Pi, which stopped working recently for some reason. I’ll try to find the file and host it somewhere else (or fix the Pi).

Have you tried safe://vault.arm/safe_vault-linux-arm-musl.zip? This is/was on this community safe network, not sure it has survived restarts etc.

You mean Raspberry Pi 3 I assume. Yes that is working for me, but the link where I got the ARM vault executables from doesn’t work anymore. You could try to compile it yourself: https://safenetforum.org/t/launch-of-a-community-safe-network/26930/152?u=draw. Edit: you can now download it from this community network: safe://vault.arm/safe_vault-linux-arm-musl.zip.

Ahh, it was hosted on my Raspberry Pi, which stopped working recently for some reason. I’ll try to find the file and host it somewhere else (or fix the Pi).

Would be good if you could.

Maybe @tfa can add it to his github for the community network. Would help a lot.

hmmm, I checked some chunks stored on my Vault and I could actually read the content of some. Shouldn’t all data be encrypted? Or does this version of the software not support this yet?

An immutable data smaller than 3 kbytes is not split in chunks and isn’t encrypted. In this case the datamap is the original file itself.

Small private files are always encrypted I may assume?

It’s probably another discussion/thread, but I can clearly see some html pages. Normally this would be fine as it is public, but if the content is something abusive, then I am acutally aware that my vault is serving this and I might even get prosecuted if some agency seize my vault.
(I always thought everything was encrypted, so nobody could know what a vault is actually storing)

Got to say this is a bit of a worry. Small chunks of unencrypted data… what if I am storing bank details, etc… all it takes is a little luck then for someone to spot data that is valuable.
@nevel could you post a screenshot of what you are describing?

Say its not true? 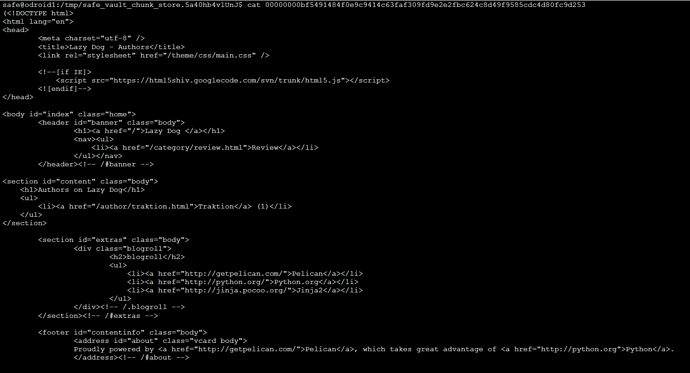 Ahh… okay on first glance that looks scary. It is a lot of plain text data!!

I’m not so concerned now.

edit: but! i get what you are saying now. What if this was leaked national security data put up publicly?
You could have every name of every undercover agent in the field, on your hardisk.
Ah, it is a little worrying.

I can’t see the image atm but it can’t be the content of a vault. All data, including public data are encrypted on a vault, so neither the owner nor anyone else can tell what it is.

Let me look for an old question that I asked: what is the added value of encrypting such data, because you have to find the Xor adress first to access it anyways? So e.g. using encrypted container _documents instead of _public.
Here is (part of) the answer: the vault owners (of that chunk) can see the contents of it, for what it is worth.

Please correct if I’m wrong in the explanation above.

To be clear: small immutable data (<= 3072 bytes) are currently stored unencrypted in the vaults.

This a problem but it will be corrected with something similar to what I described as “constant indirection with encryption” in the past. As a side effect it will also prevent a vault operator gaming the farming reward issuing GET commands on the chunks he owns.

It’s not ideal to have even public data stored in plain text in my opinion. You could easily write a program to automatically cat through the contents of your vault and uncover all sorts of things that had been assumed by the authors to be secret. Not sure if that’s an education problem or a technology one though.

Have you tried safe://vault.arm/safe_vault-linux-arm-musl.zip? This is/was on this community safe network, not sure it has survived restarts etc.

I think Maidsafe should consider adding this target in their safe_vault deliveries (in addition to existing linux, osx, and win binaries).

I’d say a build for rpi raspbian is a good start (ie armhf) and then later maybe do a 64 bit version (eg for Pine64). I guess see what’s popular. It’s easy enough for community builds to be made. But I agree at least one ARM build by maidsafe could be handy.

Thanks! It works on Odroid (HC2) as well