Link can be found here… 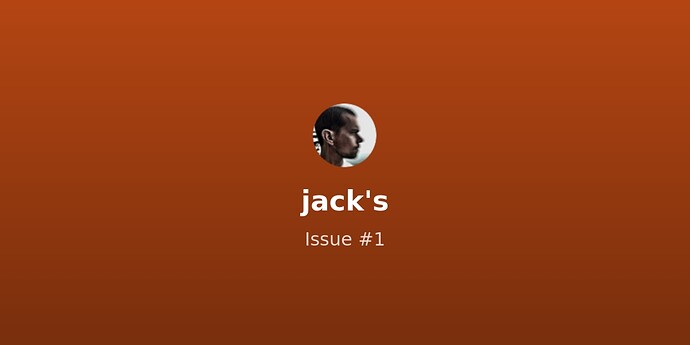 There’s a lot of conversation around the #TwitterFiles. Here’s my take, and thoughts on how to fix the issues identified. I’ll start with the principles I’ve come to believe…based on everything I’ve learned and experienced through my past actions as...

Note that @Jack is accepting proposals to fund projects like ours!

@moderators, please read this and put it in the right category. Jack’s vision is the Safe Network.

I plan to work on a social and trade platform for Safe, but can’t do it until Safe get’s to beta and I can fund with proceeds.

If people here want to get involved in that or help fund or raise money before launch, I’m open to it but needs serious people committed to an open source, not a for-profit platform. So not easy I think to get a team together for that.

Perhaps if there is serious interest, we can start a thread to develop a white paper and then see if we could get funds from Dorsey or whoever.

I don’t really want to be a lead on this either - just a creative input (and post-Safe launch a financial contributor); because my motivational levels aren’t sufficient at the moment to follow through as a lead organizer right now. Part of the reason I’m waiting for Safe beta.

Which brings me to the last principle: moderation. I don’t believe a centralized system can do content moderation globally. It can only be done through ranking and relevance algorithms, the more localized the better. But instead of a company or government building and controlling these solely, people should be able to build and choose from algorithms that best match their criteria, or not have to use any at all.

This is actually a wonderful read. I had considered Jack as someone who at least ‘got it’ and came from some sort of the somewhat anarchist stock so prevalent at the birth of the internet.

I agree wholeheartedly with what he is saying, but can’t help but wonder ‘why now’. For a while, he had in interviews the clear look of a man who was captured. Why is it that so many people of power only start approaching truth once they no longer have have that position of power?

Why is it that so many people of power only start approaching truth once they no longer have have that position of power?

I think this is the problem with CEOs, they are like politicians and will not tell you the truth of their opinion for fear of losing votes with the latter and issues with SEC (FCA etc.) and investors in the former.

That part of society seems to actually penalise the true opinion of these people, regardless of right and wrong. It is a real problem in how we have configured society.

Public versus private corps. is a huge factor.

Once you have shareholders and regulators watching you everything changes in management.

It is often enough to say “don’t like specific content - just don’t consume it”.
But making algorithms which allows even not to see it - is great step forward.
Right now unpopular content is just banned, while it is possible to show it only to people who like it.

Safe is great as a base for a platform as it allows posters to store their own data publicly. My general idea for a social and trade network on Safe:

Frontend - software for creating, organizing, and reading feeds.
Backend - indexing service on Safe - using something like the plugin’s idea (mentioned on the forum a yarn ago). You run your feed app to create as many feeds (and different types/categories of feeds) as you like and it submits it to the indexing service with the appropriate feed type and post-specific tags.

You can then subscribe to feeds using tags, particular ID’s, and feed types by using the index service.

You pay to index your post - small fee to cover cost of index service.

You can upvote or downvote tags to indicate whether content is true to the tag (this would be separate from specific content voting). The index service uses collective tag rating data to evaluate and rank the uploader which increases or decreases the users visibility. And uses the specific post ranking to inc. or dec. the post visibility - although if subscribed to particular users feed, you’d still see everything.

I read about Hadoop and Safe Network does share some major similarities with it. The main big difference is that the Safe Network is hosted by individuals that contribute to a joint distributed network whereas Hadoop is often solely hosted on the hardware of a company that utilizes it.
The difficult part that the Safe Network is solving is to ensure trust when all hardware/nodes are unknown to each other and one can also not ensure the intention of all nodes is trustworthy.

Beside that it should in theory function very similar and the RDDs are hidden away by the networks own core functionality. You only need to connect as a client and tell it what to upload and where, then the Safe Network will take care of:

It would be good to see what Safe Network could learn from HDFS and see how it might provide similar tools like Spark or MapReduce in a computation layer. One of the key features is that data doesn’t move to computation nodes but the functions are passed to the data so that the necessity to send data (including latency, bandwidth and timeouts) are brought to the lowest level.

These features would mean that the network can perform much better in the future since bandwidth is often the issue with nodes. Streaming big data constantly will generate much more bottleneck than running local functions to work with the data and then only send the aggregated results which can all happen in parallel and are independent of each other.

EDIT: An idea would thus be to have to specify that certain data is meant to be stored on a node that is capable of computation. Could be stored with an added premium since there will be more data nodes that might only capable of serving (low cpu/memory specs) vs dedicated hardware that can earn additional tokens by performing functions on the stored data. One problem I see here is that the node then becomes aware of the content of the data. I don’t think any computational node would be able to get around that problem? Food for thought.