Eric Wall has run through some of the marketing smoke from the Hashgraph team and laid out a pretty thorough trouncing of the protocol. Its a good fun read if you like that kind of thing: 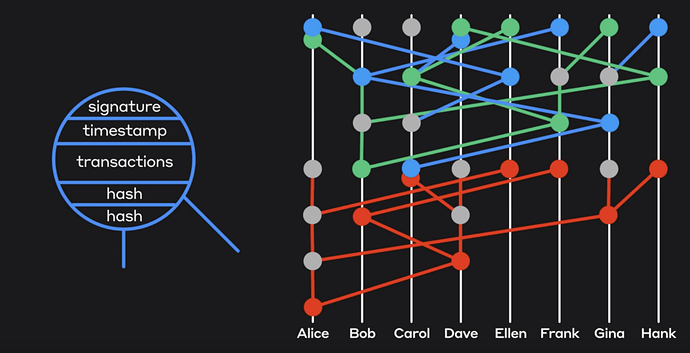 Hedera Hashgraph — Time for some FUD

Got a law degree? Good! You’ll need it.

Has anyone here the knowledge (and inclination) to lay out the differences parsec has from Hedera’s data structures and consensus scheme? Also perhaps more interestingly the reasons for similarities and deviations from the design. I’m afraid I’ve never got my head around it.

With Hashgraph about to launch a ‘public’ network it may be about to receive a lot more scrutiny.

First thing about Hedera Hashgraph is it’s permissioned by a group of “trusted” companies that help run the network. Since it’s also PoS (proof of stake) then any malice should be expensive and personally costly. There was a lot to be humored by in that write up, especially how they are working in Solidity for ethereum smart contracts to run on the platform but that it’s actually slower at running them than ethereum.

I can’t say but I think they are technically more similar than dissimilar but those differences can mean a lot.

Yeah I think it was something to draw inspiration from for PARSEC (gossip about gossip) but just not an implementation for permissionless network, trustless environment, freedom etc.

The write up is a worthy read so don’t take my short bit as a synopsis or anything.

Since it’s also PoS (proof of stake) then any malice should be expensive and personally costly.

Quote from the article:

… the way it works in a real Proof-of-Stake chain, is that if the validator nodes sign invalid states or multiple different states with the same block/sequence number, you get to destroy their stake by broadcasting the fake proof they sent you.
Not with Hedera Hashgraph!
In the Hedera system, the nodes haven’t actually locked up any stake that you can destroy. So if this happens, you’ll have to go to a court !

Ha! Nice catch @Dimitar. I guess that was part of the main point of the article wasn’t it. Glossed over that one, thanks.

The equivalent of slashing the stake for the safe network would be a slash in the node age, but how can it punish young nodes?

but how can it punish young nodes?

The younger the node, the less reward it will have. This has not been clear, but initially the reward will be section wide and pro-rate based on age. Vaults require to punish nodes for non compliance and this will reduce their age, depending on the malice they may be killed and then have to start again as an infant.

Having a scarce resource at risk like reputation (aka nodeage) is an important foundation for a permissionless (or at least meritocratic) system. This should already put Safenet ahead of Hadera in principle.

How about this state proof scheme (or as Eric points out, state commitment scheme)? When a node re-joins a group of peers, or even initially joins, in Hadera as I understand it it has to ask the peers for the current state and then build from it using the real time gossip. There isn’t a way for the node to verify that state though - it just trusts that the sender is honest.

Does safenet use parsec the same way or is there some means for the new or re-joining node to ‘trustlessly’ or independently verify the latest state of the common data structure?

Does safenet use parsec the same way or is there some means for the new or re-joining node to ‘trustlessly’ or independently verify the latest state of the common data structure?

PARSEC will create genesis blocks after splits and maybe more frequently. We are working on PARSEC pruning atm so that will become more clear (how often a genesis occurs). A new/rejoining node can do several things such as get history from network genesis via the proving chain (not a graph but a linked list, signed) or if it has a later genesis then get the history from that in the same way. They will get the graph from latest genesis and build that in a similar way, real time gossip whilst confirming graph validity.

Okay, interesting. Sounds like a more realistic and workable approach than hadera indeed. Your para generates about 8 new questions for me, but I’ll leave it here - will try to digest the paper again. Thanks.