I’m currently looking into creating a simple game on top of the maidsafe network and was looking to see if anyone wanted to work with me on it.

A bit about my background:
I have been a video game developer for over a decade on several Xbox, Xbox 360 and PS3 titles and also worked at Zynga on games like farmville. I sold my last company which made the game Rawbots (check it on youtube).

I’m looking to bring my knowledge and experience from social gaming to make simple games on top of the maidsafe platform. These games will need to be able to handle 10+ million players. I have advertising contacts as well as access to venture/vulture capital.

I’m looking for partners to help. My motivation these days is much more for activism than financial, but I know finance is what makes people help, so I’m good at that as well

So if you are a talented Software engineer that knows how to build decentralized apps on top of Maidsafe, and want to come on an amazing journey, please feel free to contact me at nharan81@gmail.com

Continuing the discussion from Most wanted APP for the SAFE Network: I’ve been thinking about posting this for awhile and was going to ask this (in fact I might have posted this on the app thread myself awhile back i don’t know. But @whiteoutmashups has taken an idea I’ve had for a long time and voiced it so I’m going to take my own throughts and turn it into a seperate thread. What’s the difference between an RPG, a RTS and an FPS? Camera perspective and number of characters. The gam…

Yep, thanks. I would personally look to build a simple game on top of the maidsafe platform than a complex one. A simple game can monetize quite well. Are you a software engineer?

Btw, I’m also working on a legal platform, though it isn’t blockchained. Check it out here:
“https://dl.dropboxusercontent.com/u/107821667/Lawfortress.mp4”

Let me know if I can be of any help.

Hi there, I just saw your post as a safe network user that would sound cool,
The good thing about the safe network is you can have trad-able assets for exchange safe coin, similar to the safex exchange.
I know the spells of genesis on country party raised alot money to fund there game, and are still selling cards as assets.

anyway my thoughts, I wish yo luck

I think best person to speak to is paige.peterson@maidsafe.net as this is just public forum

I’m hoping that this forum also has software engineers that could help. I look forward to learning more about Maidsafe through my interactions with people on this forum and the team. My time is unfortunately limited, but I will try my best to learn about Maidsafe.

Definitely not my best interview but was interesting hearing myself after 4 years. I seem to be doing pod casts with currencies I think are going to go up

I look forward to the maidsafe podcast

nharan, being apart of the farm-vile and Canada, by any chance you was not one of the those’s guy’s made famous on the south park episode.

Here’s a fun game to pass the time. 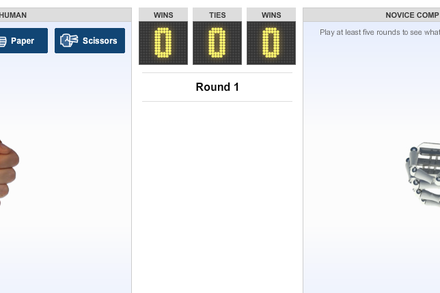 Rock-Paper-Scissors: You vs. the Computer

Test your strategy against the computer in this rock-paper-scissors game illustrating basic artificial intelligence.

I’ve been looking for an app to work or to contribute in general to SAFE. I’ve done some game dev but not commercially, would be cool to work on something in Rust though. I have 6 years industry experience in programming Haskell / Erlang and 2 in other languages and have written a bunch of games dev libraries. The latest game thing I did was to bind ThreeJS in Haskell and compile it to JS using GHCJS. What kind of game are you looking to make?

Wonder if these would work on Alpha 2.

All web browser based.

Restarting this conversation from way back to see if we could build a game on top of the safe network. Ideally there would be no transaction costs.

I posted this a while ago (but it went quite off-topic…):

Obviously RuneScape itself could never be open-source — it relies on users performing repetitive actions and interacting with NPCs in a way that means open-sourcing it would enable cheating. So an alternative would have to be engaging in a human way that software can’t emulate somehow. In a non-PVP area, you could just ignore human players completely. Truly open-source would mean that any surprises in quests and whatnot would be public knowledge before they’re even added to the game. Being tru…

Would your game be open-source, and would the gameplay be fully decentralised? What aspects of existing games would you want to implement?

Yes, the game would be fully open source and decentralized. Are you a developer?

Not a game developer, just interested in how it could work and what it would look like.