Can some kind person point me at some sample DBC data ?

In vaguely related news it took 25 mins to create 1000 wallets and keys on a std baby-fleming with the latest code.

Upload and share easily very large files with your friends. Registration is not required. Upload your files and send the retrieval link to your friends. This sharing service is FREE

If that link doesn’t work, try this:

Thank you.
However I’m failing here cos cutting and pasting DBC data wont work and I should have sussed that myself. Feeling a bit daft TBH.

So how do I generate a valid DBC when running baby-fleming? @josh?

Seems like there is a genesis_dbc in the folder

This probably should be uploaded, hmmmmm thought that you could issue a dbc from cli
Still can’t wrap my head around how dbc’s work now, would be great to have some cli’s

The reward_secret_key in the open makes it easy for attackers (hackers)

@19eddyjohn75 is correct that dbc should work.

It would have if I had remembered that genesis_dbc was hiding in ~/.safe/node/baby-fleming-nodes/sn-node-genesis.

So now its time to write some code to send a few safecoins to each of these 10k wallets. 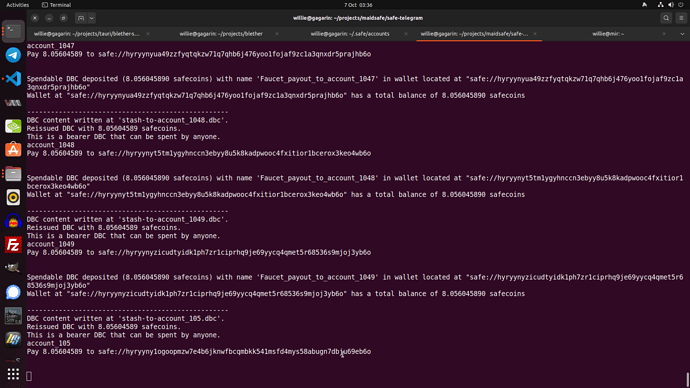 Still until I get a lot better with rust or we get an API it will do for now.

I broke it — again

Been out most of the day and left two scripts running - One sent 8.blah coins to each of 10k wallets and the other sent 1.blah to the same wallets. I stopped one script as it seemed unresponsive but I think it had just slowed to a crawl like the other one, After ~12 hrs, I think only 4-500 Tx out of 20k had been completed.
I went to check how much was left of the original DBC and this happened

I will do more testing to see if I can replicate this. Its a straightforward baby-fleming with 11 nodes
Not that having 10k wallets on one section is going to be a common use-case but it is certainly a possible use-case. It wont be done with a crappy bash script in the real world though so I am not sure just what I am proving here. “Things that can be done with bash but probably shouldn’t” perhaps?

there should never be an overflow in wallet code. This looks like a serious bug to me, and should be reported.

Unfortunately I forgot to prepend with RUST_LOG=trace so I have no logs
I will try to recreate the problem
Funny thing was -after this error the network kept running and I could put get and send DBCs AND get the the correct balance for many “accounts”. Only the wallet that I had transferred the genesis DBC into was affected.

<!-- Thanks for contributing to the project! We recommend you check out our "Gu…ide to contributing" page if you haven't already: https://github.com/maidsafe/QA/blob/master/CONTRIBUTING.md Write your comment below this line: --> ``` Error: 0: ContentError: Failed to calculate total balance due to overflow when adding 4525521320.878494766 to 18102085205.372274454 ``` Firstly, unsure if this should be reported here or in sn_dbc Running latest from github `commit 28c7a9f7b2ce43d698288c12e35eb6a7026a4163 (HEAD -> main, origin/main, origin/HEAD)` I got this error when checking the balance of a wallet named STASH from which I had been making micro payments to other wallets. First I set up 10,000 keypair/wallet combos which I refer to as "accounts" for now. Then ran a script to reissue low value DBCs and deposit them into the wallets. THat script seemed to be running OK so I changed the amount reissued from 8.something safecoins to 1.something safecoins and ran the script a second time from another terminal. After some time I queried the balance of $STASH to see ow much I had disbursed in total. Full error ``` willie@gagarin:~/.safe/accounts$ echo $STASH safe://hyryynyofen8fwfiwg5ukh9qtthh96dmoo4qd9igyrwtodnc6qm6eoqu3ayb6o willie@gagarin:~/.safe/accounts$ safe wallet balance $STASH Error: 0: ContentError: Failed to calculate total balance due to overflow when adding 4525521320.878494766 to 18102085205.372274454 Location: sn_cli/src/subcommands/wallet.rs:104 Backtrace omitted. Run with RUST_BACKTRACE=1 environment variable to display it. Run with RUST_BACKTRACE=full to include source snippets. ``` Querying other wallet balances gave expected results and although the disbursement process was cripplingly slow, approx 1Tx every 30 secs, unrelated PUT and GET operations on that same baby-fleming were normal. https://safenetforum.org/t/dbc-data/37532/8?u=southside