The vote is not blind for bad nodes because they are controlled by the same attacker. They can automatically base their vote on whether or not they are less than 5 in the group (e.g. vote Yes if <5 and vote No otherwise).

How do they know if the five are in the same group? I don’t think the network tells them. I could be wrong.

The attacker can get all these names from the nodes he controls and discover which nodes belong to the same group.

But I am not sure of all that because I lightly studied the code. Members of the MaidSafe team would be more competent to confirm if all that is correct.

Thanks for the explanation, like always I better understand be doing it myself. I’m an autodidact person. That’s why I have hard time to understand other. But your presentation was help full to me to get me to the right way to learn how it work. And I fully understand how it work now. Thanks to you. But I did not learn the same thing as you tough. I tried with excel and unfortunately the COMBIN function did not support big number on my side. It return #NUM error in my cells after some big number. Small number work though. So now I’ll try to program it myself in C# and generate a list of result to really prove the real probability of attack. I hope to be able to do this shortly, maybe in 1 to 3 days I hope.

In a way it is better than 28/32 because the attacker needs 92% of nodes to control half of network, but in another way it is worse because the first group can be controlled with only 42% of nodes.

As conclusion, here are the percentages of nodes needed to control one group and then half of the network for both consensus cited by OP:

I dont know the damages that can be created by only one bad group. In another thread it was stated that they were minimal, but I am not convinced by this.

That’s why we need 28/32 so that you can hardly control a whole 1 group without getting pushed out by the rest of the groups as bad nodes.

Finally I have done it. I was not able to sleep and it was quicker than I though. But the result is really rewarding and I learn a lot.

Well the presentation is not so fancy. But you can click on any image to access it at full size.

The two first image is a proof that the formula is good. Which have to total 1. Which it’s normal.

Next it’s a sample with all data. To show a little how I made it. 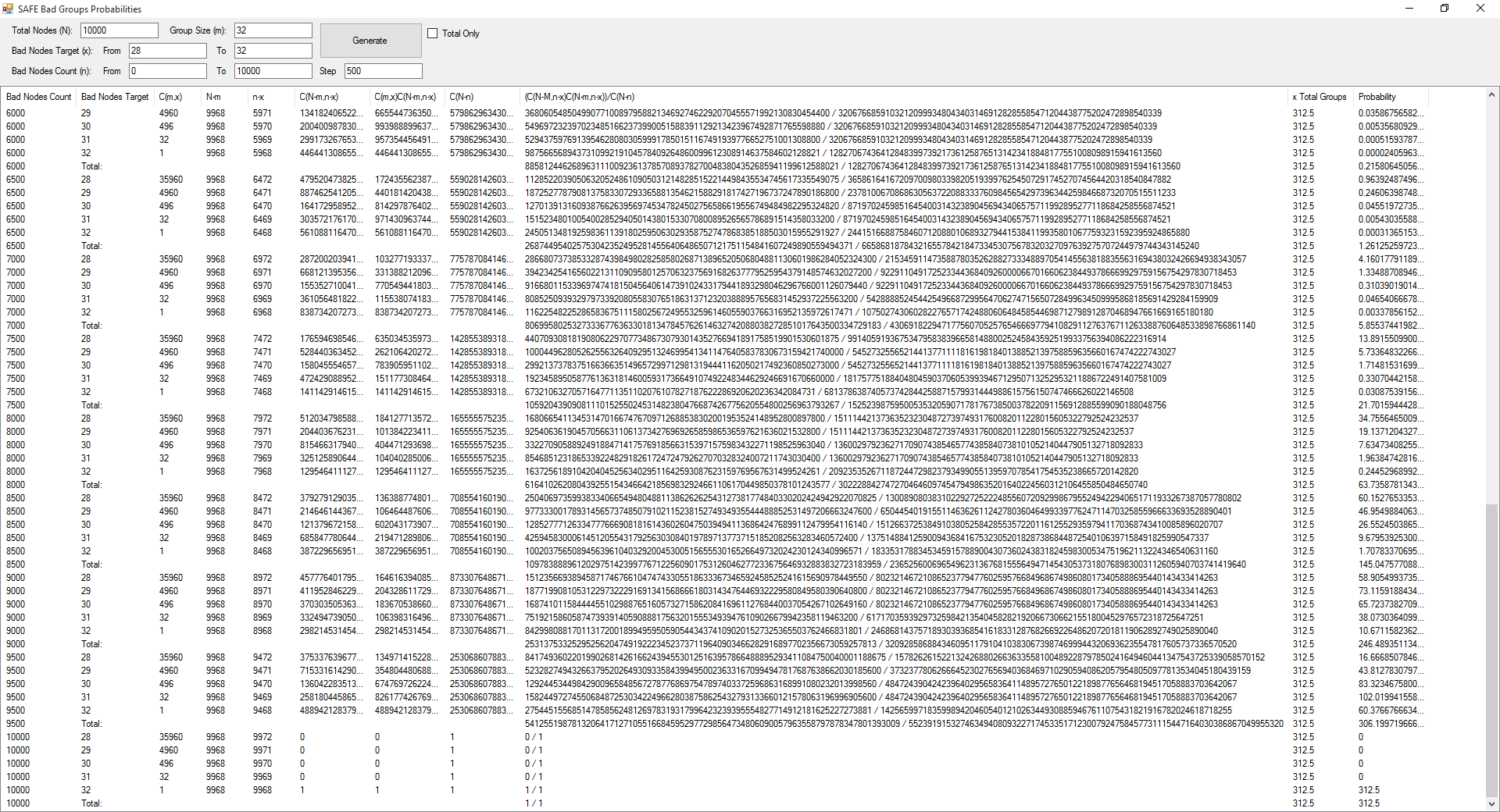 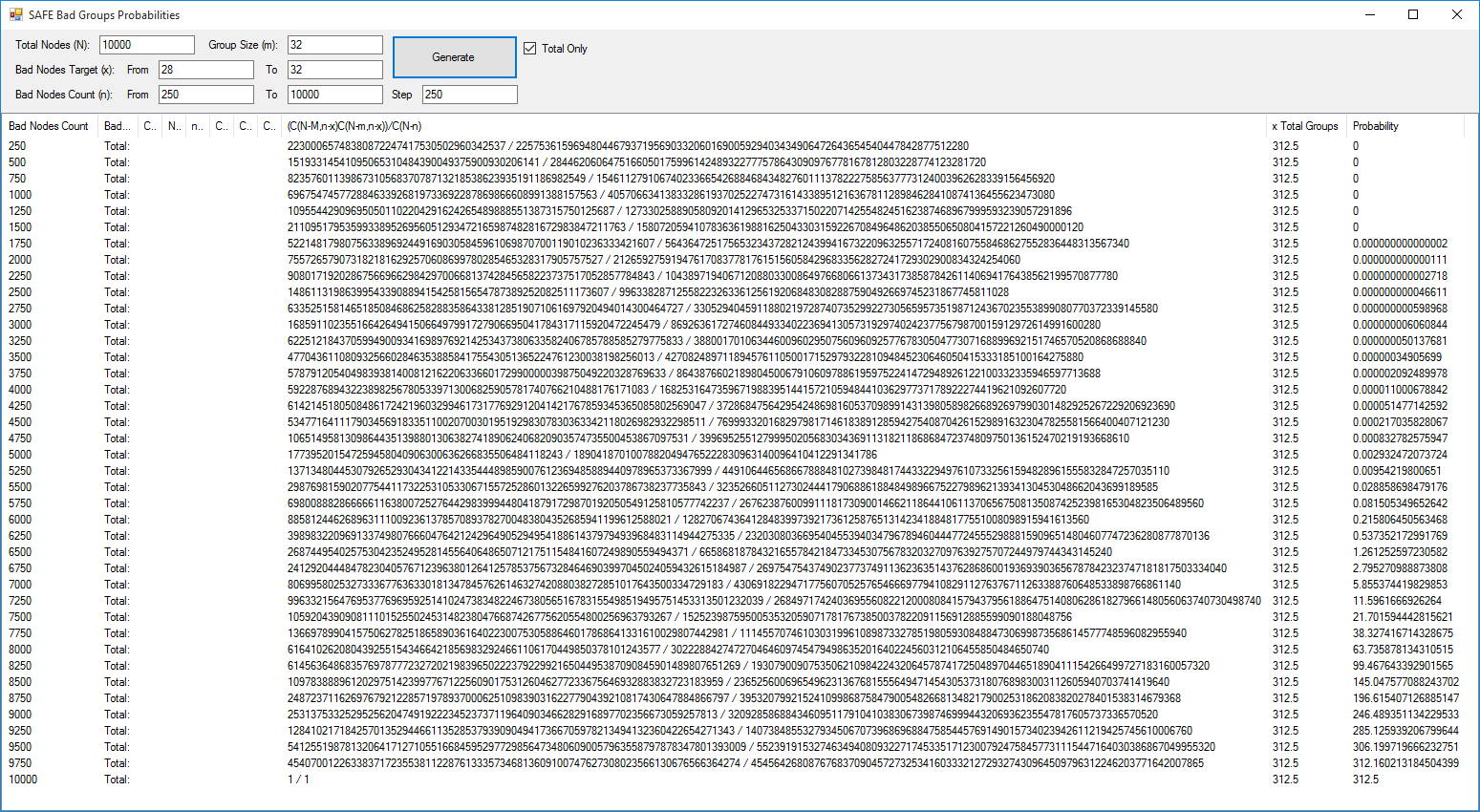 Here is the 7/8. Notice how much more dangerous it is to have least node in a group. 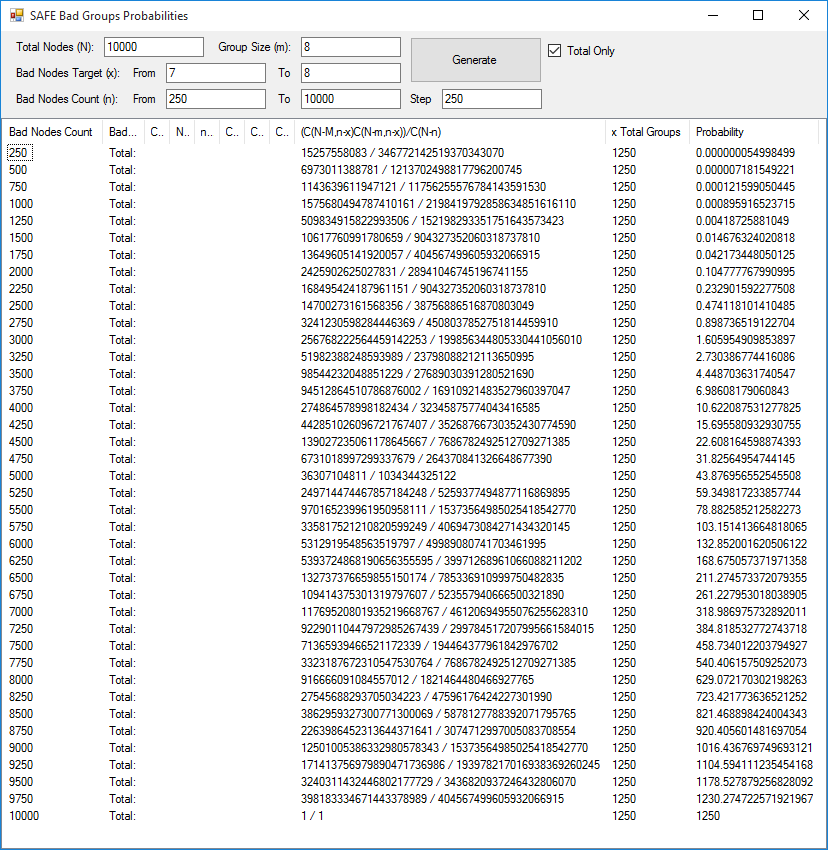 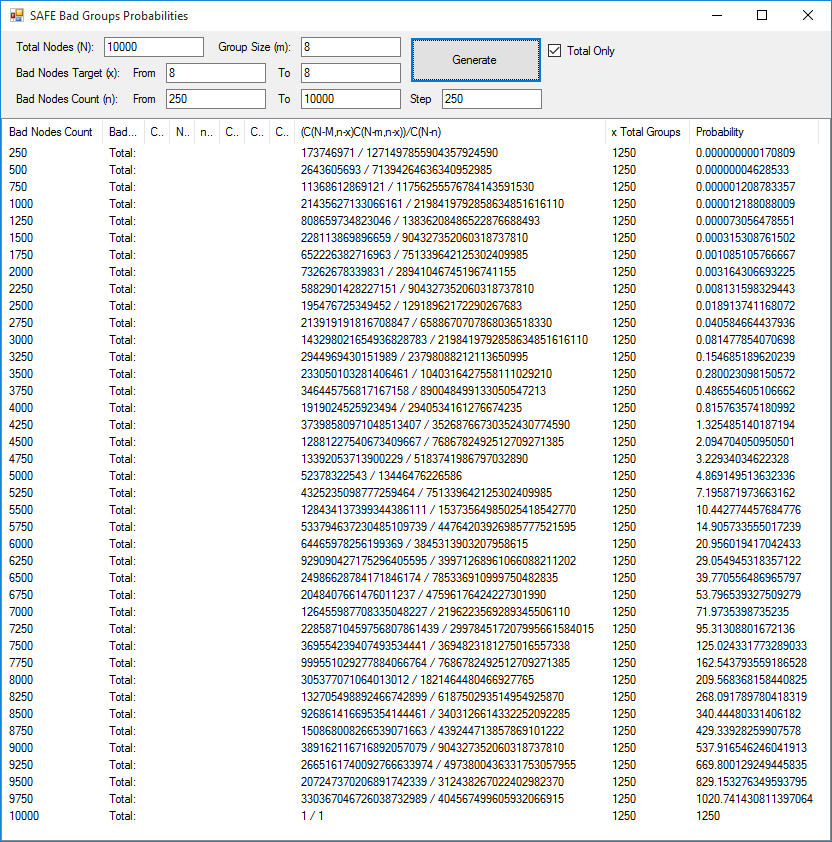 I was joking and you like joking. If you are serious about it, ouf! We have to wait a long time for the network get so much big before we reach that goal.

We have to wait a long time for the network get so much big before we reach that goal.

But you have to admit that it’d be fun to setup 40-50 SAFE VMs and put them on a continuous reboot cycle!

Without the reboot I tried with 64 nodes in my machine. Only to upload the web page(the example that was released recently) took me hours to process, use 65 GB of memory (Lucky I have a SSD for cache) to finally end to an unknown stat and stuck there.

Awesome, that is the outcome I was hoping for!
Thanks for taking time to try this out.

The last value it’s the probability and if it’s 1 that’s mean it’s 50/50 chance to happen.

The last value 1.26 on the line with 6500 bad nodes means that the attacker will probably get one bad group (meaning a group with 28 bad nodes or more). This is the same result I got earlier:

The bad group percentage in red indicates that the attacker controls at least one group. It appears that to take control of one single group the attacker needs to control 65% of nodes.

This is a good sign that our implementations are both correct (yours in C# and mine in Excel).

I think that your last column is rather the probable number of bad groups because a probability goes from 0 to 1.

To be true I still have little doubt about my last column. I can’t find any confirmation on the web about that so I do it the way I think it should be done.

We are talking about probabilities. If you roll 6 dices, you will probably get at least one 6 but you can’t be sure of that.

Here it is the same: an attacker adding 6500 bad nodes to a network with 3500 nodes (for a total of 10000 nodes) will probably control one group but he can’t be sure of that.

But if he doesn’t succeed immediately, he just has to wait a little because the network reconfigures itself frequently due to an expected high churn rate. It’s like a rapid succession of different networks to be tested.

But if he doesn’t succeed immediately, he just has to wait a little because the network reconfigures itself frequently due to an expected high churn rate.

Right, so a good approach to speed this up is to clean configuration, join the network, see whether you hit the jackpot, if not, rinse & repeat.
But the attacker would have to have a way to monetize this.

Since PARSEC publication, it has been mentioned in several topics that an attacker must provide 1/3 of the elders to disrupt the network. But in fact, this would be true only if the faulty elders are uniformly distributed among the sections.In all probabilities a section will be impacted with a much lower ratio of bad elders.

I have updated my Excel file implemented a long ago to compute the probable global ratios for disruption with PARSEC threshold (1/3). Maidsafe has indicated that the section size will be increased from its current value (8), but unless I missed it, the new value wasn’t given. So, I choose a section size of 31 similar to the initial old value 3 years ago. I have taken a total population of 100000 elders as an example. With these values I found that:

Note: With higher populations the percentages are slightly lower (but of course, in absolute value the attacker must provide more vaults).

Here are the corresponding curves and tables:

Disruption of a section: 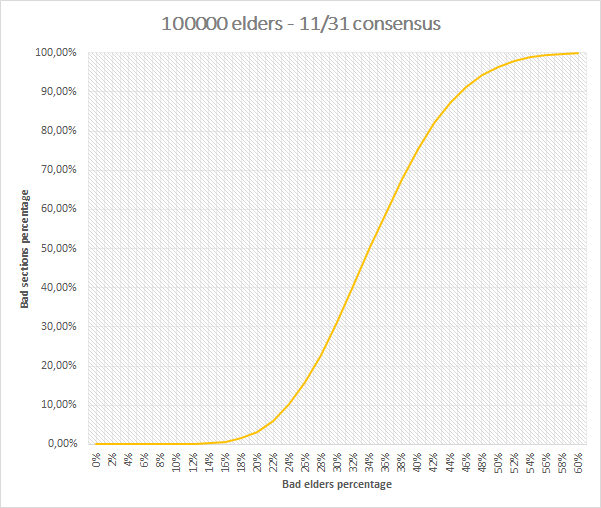 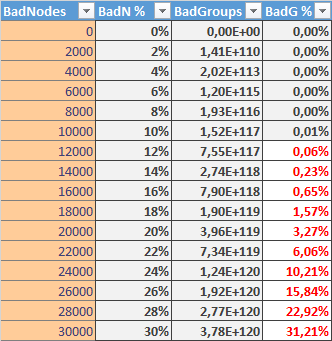 Control of a section: 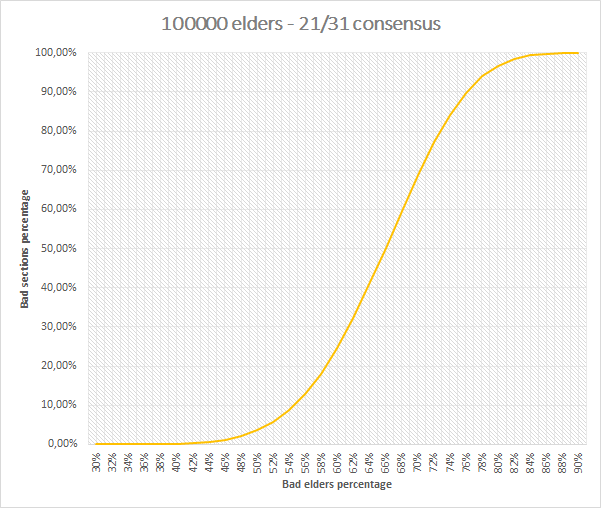 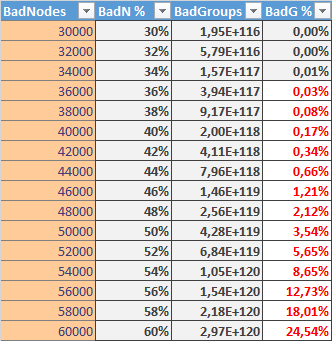 But even one “bad section” means the whole network is “bad” as sections trust each other.

Based on tfa calculation number of nodes in a group should be between 9 to 26 ? And group of 9 will have 8 elders and group of 26nodes 15 elders or they become elders from adults when forming new group ?
https://forum.safedev.org/uploads/default/original/1X/b013a711b3fb4b8326adaff24748cc70487dcdb0.png

Second, there is a parameter named “group size” that controls more or less the size of sections, but in fact their sizes will be typically between this value and 3 times this value.

My simulations above suppose that section size is 31 but I don’t know what will be the future value chosen by maidsafe.

This was not my understanding. I thought it was >50% of age and >50% of nodes to make consensus?