A recent article published on CoinTelegraph, entitled MaidSafe Founder Seeks Monopoly on ‘Distributed Network System,’ caused some unintended controversy. We feel it is our duty to provide readers with all available information, which is why we got in touch with MaidSafe COO Nick Lambert. 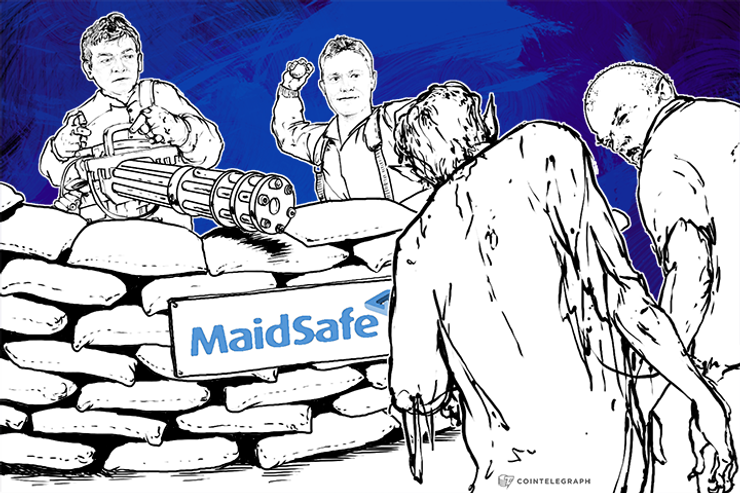 Clearing the Air Over MaidSafe’s Patent Request: An Interview with COO Nick...

oh my god, that picture… almost has potential to replace the little maidsafe plane with the banner…

Great interview Nick and good of them to publish an interview, rebuilds credibility and resolving an error is a sign of a good team. so nice one. I liked the tone and acknowledgement of differing opinions. I see some of the I hate patents and that’s that as like an anti war reporter who is then asked, if you hate war why the kevlar jacket and side arm, surely if you hate war then take these things off. It is similar in many ways to that, to help people understand the war and its madness then report, but to report you need to follow some of the rules (wear kevlar, protect yourself with a gun).

Then people say, how do we know your not gonna shoot our soldiers with your gun?

That is like asking how do we know Ghandi is not gonna stand up with that stick of his and bash our heads in? Then we see another person with a stick covered in blood rushing us after killing 500 people and try to argue they are just like Ghandi, they both have sticks.

So the answer is as usual somewhere in the middle and to allow extreme views that do not hear is a mistake and perpetual argument. Once more understand the vision of your opponent in such debates and say, hey I hear you, I do not agree with your path, but I agree you should try that solution and I will try mine, all I can hope is one of us is right and the vision is understood and realised.

I remember watching a TED video about completely opposing views and the call was to take your worst intellectual enemy to lunch and both listen, you will always s find much more in common when you look close and understand the end game. It is usually the route that is in grave disagreement to the point of thinking the other is evil, but that is ego and lack of being more aware of a much bigger picture. So being aware means to listen to everything and everyone where possible and question motive and vision and then get more relaxed about how to get there.

For instance I cannot see how we can trust computing and consensus without autonomous systems, full openness and networks following simple rules, many others believe a blockchain will do it, others believe federated consensus servers may do it. I do not agree with all the routes, but I am glad they are all being tried and I hope the vision of them all is very similar (freedom privacy and security). So we could debate all these routes and folk see massive fallout, when we get more enlightened we see its all just lean manufacturing type approach, try everything and hope at least one works.

Anyway great for CoinTelegraph to have done a follow up so fast and great @nicklambert can explain some of this so well and does need 1.5hours babbling to do it

Stuff is formulaic. Try to co-opt with say open bazaar. If not try to smear the innovation, say its not unique, not prior, not efficient, impractical, cant work, not delivering, express ‘expert doubt.’ Then smear key players.

But this buzz gun stuff says you’re not going for it. Very proactive. You must discredit the attempt to discredit you. Its a rite of passage. Especially with SAFE set to undermine the whole discrediting process.

Looks like David’s wielding some kind of converted leaf blower…zombies look quite disappointed they missed out on the crowd sale.