Bitcoin will overtake the dollar in importance as it becomes the single global currency of the internet within a decade, Jack Dorsey, one of Silicon Valley’s leading entrepreneurs, has said.

Someone should tell him about the SAFEnetwork.

Seems a bit premature. I think some sort of crypto may, but it is early days. Tbh, I don’t think the world needs another monopoly though - competition is good.

Let’s see how a blockchain makes billions of transactions in a single instant at the same time.
Anyone who thinks about digital cash with blockchains is clueless about the scale that represents cash replacement.

Dorsey and Al-Waleed bin Talal are both in deep sh!t. The more either of them pump Bitcoin, the more suspicious I get. Check this out. Keep your friends close and your enemies closer?

“I am the first person in the world, Roberto De Jesus Escobar Gaviria, to publicly come out and claim that Bitcoin was created by the American Government, and I am not going to be the last person to say this. The world is going to wake up. The world is going to see that this was created by them. And when they see it, it is too late, and when the CIA founds out that the world knows about this, the CIA is going to sell all of their coins, and they will destroy the value of Bitcoin…That’s why I am creating my own cryptocurrency called dietbitcoin (DDX).”

I wouldn’t really take this guy’s advice about Bitcoin, but about the CIA, I’m sure he knows a thing or two… According to Roberto Escobar, brother of the late drug lord Pablo Escobar, Bitcoin is a scam run by the US government, and his new “dietbitcoin” is the answer.

Don’t believe any of it. The suggestion is the CIA will crash bitcoin, why? Wait till individuals, countries and organisations of opposition fully adopt and then financially damage them? Full global adoption of bitcoin is not computationally efficient if not impossible.

One suspicion I have had but put down to media stupidity is the pumping of the opinion that bitcoin spending is anonymous, it isn’t it’s a public ledger, and you leave a trail of purchase history - if at any moment you link it to a bank account, or any time a mishap - boom - every thing is linked to you. That would be of CIA interest, not crashing.

Anyone else watching the Americans on Netflix? This episode was interesting to watch https://www.newyorker.com/news/amy-davidson/the-americans-meets-the-internet

40 years ago, a project of such technological significance as SAFEnetwork would have been… valuable. Thankfully opensource and real freedom these days allows groups to work on technology to make the world a better place, and you don’t need to worry about being mixed up in stupid spy games.

I tend to agree with you. The CIA could only crash Bitcoin if they control Satoshi or his coins…or if they themselves are Satoshi. I think it would be less about crashing it than about getting the value while they can. Unlikely, but since no one knows who Satoshi is, it seems prudent to me to keep a critical eye open to even a weak possibility. If there was enough adoption of Bitcoin, I would imagine that any Satoshi-sized sales still couldn’t kill the network. But then what? Trying to either hide out in some altcoin or in fiat? Good luck. Maybe SAFE!

That said, there are plenty of spy game reasons for the CIA to be involved either from the beginning or later on. I feel confident that Satoshi is not anonymous to the spy agencies or military intelligence. No one is anonymous on the internet. The Intercept just came out with an article on the Snowden documents talking about the NSA’s tracking of Bitcoin since 2012 or 2013. Considering the turf battles between the NSA and the CIA, it would be easy to understand the NSA’s interest if the CIA was already interested. Then again, if Trump succeeds in “splintering them into a thousand pieces”, then perhaps the ownership of any private keys laying around will change hands…but I digress.

Belief? What does that mean anymore in the world of fake news and fake freedom?

The bourgeois New Yorker promotes a show about Russian spies and Arpanet? Nice. Looks like more media and Hollywood collusion to further seed the narrative that Russia is the garden serpent of the world’s ills. As you say, “don’t believe any of it.” Trust me. I won’t. Looks like a good show though! 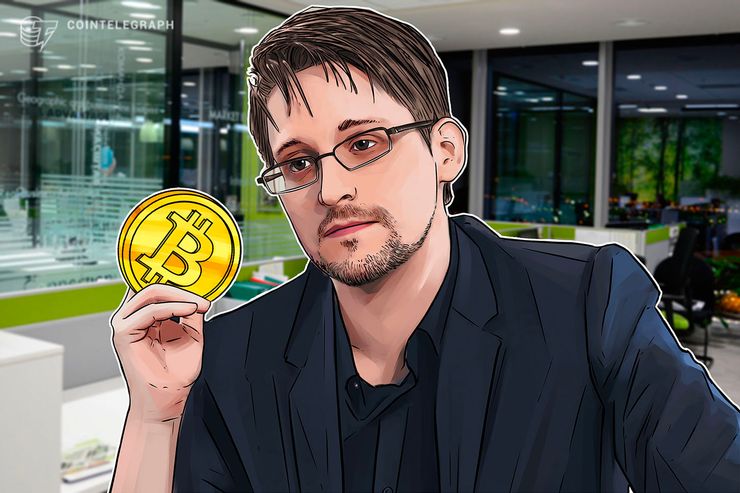 Edward Snowden cast doubt on Bitcoin in an interview March 22 due to the public nature of its Blockchain.

Blockquote “The much larger structural flaw, the long-lasting flaw, is its public ledger,” he said of Bitcoin, adding that he nonetheless “may” have used it to buy server infrastructure in 2013.

We could do with something decentralised… hmmm… what could that be?

The problem is it’s taking forever to get SAFE into beta and final release. Bitcoin is what they have at the present moment.

Snowden said he liked Monero and Zcash…can we meme-bomb him about SAFE Network already???