Interesting science on the evolution of complex behavior. 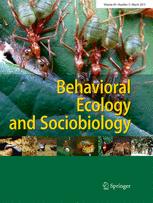 Understanding the maintenance and evolution of complex group behavioural systems has broad significance to our understanding of social evolution, yet we have little insight into how these systems have

Yes, very interesting and leads to loads more interesting questions - I find the fact that this applies to other animal social systems , particularly Human Society quite thought provoking . Nice one…

The complexity and intelligence of the system lies not in how clever individuals are, but how they actually communicate with each other

Understanding natural intelligence may be a prerequisite to building AI - Prof. Steve Furber

Expanded from the first link in OP:

A James Cook University Professor’s study of silk-weaving ants is promising to change our understanding of how all creatures work together.

JCU’s Professor Simon Robson led a study on the behaviour of the ants that found the insects could evolve and abandon and then re-evolve the practice of building nests from silk, with different species adapting it in different ways once it was re-adopted.

In its original form the silk used in nests comes from the ants own larvae, but in later stages worker ants steal it from spiders.

The common view is that simple systems gradually become more complicated over evolutionary time, and that it can be difficult for these complex systems to evolve further.

But Professor Robson said he found something different. “My research suggests a complex system can evolve relatively quickly, and that once it had evolved it then was very flexible and plastic in an evolutionary sense.”

Professor Robson said a complex system is an intelligent and coordinated group behaviour that works only because the individuals that comprise the group are themselves very simple. “The complexity and intelligence of the system lies not in how clever individuals are, but how they actually communicate with each other.”

The findings will be presented in the prestigious Journal of Behavioural Ecology and Sociobiology as the first to describe a complex group-level trait that did not arise through behavioural progression from simple to complex states.

Professor Robson said the data can be applied to all social systems, not just in the insect world. “It suggests that while it may take a long time for a complex behaviour to evolve, it can be lost, and partially regained, very quickly. It also shows there are alternative pathways that can be used to get to the same end. The evolutionary process has access to an almost unlimited tool kit of possibilities!”